Sharon Osbourne has clearly forgiven her rocker husband, Ozzy Osbourne. Ozzy is 44 days sober, and the couple looked madly in love at the Daytime Emmys on Sunday. 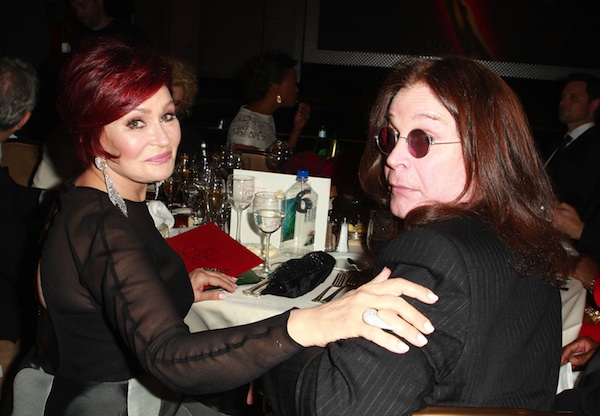 Sharon Osbourne and briefly estranged husband Ozzy Osbourne are back together. The famous couple — who have ben married for more than 30 years — split in April amid reports that Ozzy had relapsed.

Sharon and Ozzy hinted at a reconciliation just weeks ago in May when the two were photographed at a charity event cuddling and kissing on the red carpet days after a public lunch date in Beverly Hills. It now appears the reconciliation is official: TMZ reports Ozzy moved back into their house on Sunday.

Ozzy, Sharon Osbourne reunited, but will it last? >>

The Osbournes showed up to the 2013 Daytime Emmy Awards looking very much in love — they gladly kissed and held hands. TMZ says Ozzy is reportedly 44 days sober and Sharon is deeply committed to supporting him in his sobriety.

Sources for the celebrity gossip website say Mrs. Osbourne employs a “sober team” to help Ozzy get through the day and “steer clear of potential hazards.” After Sharon and Ozzy attended the awards show, they shared a few more kisses and returned home.

April was a tough month for the Osbourne family. Jack Osbourne was clear with reports back on April 15, 2013, that despite his parents’ marital stress, they were absolutely not divorcing. Jack was upset over printed stories in British tabloid The Sun that claimed Sharon and Ozzy were not “acting like husband and wife” and went out of their way to avoid contact with each other.

As summer is officially underway, it’s clear Sharon and Ozzy simply needed a little breathing room to get through a particularly stressful time. We’re happy the longtime couple remains together.