Savi may have gotten a positive sign, but it’s a definite negative given that she isn’t sure which of her men caused it. 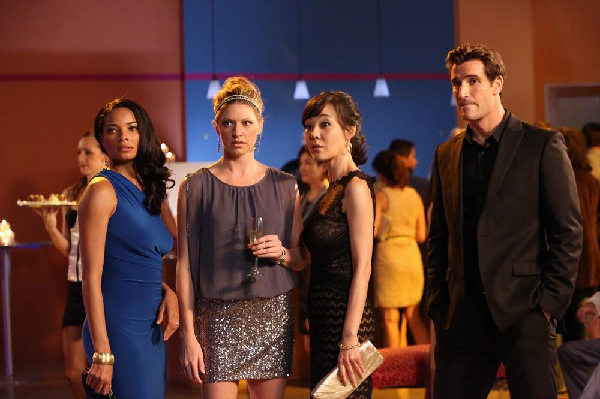 Mistresses is making us sweat. No, not because it’s the new sexy, summer soap. Because the show is chock-full of rising trouble. The characters just seem to be digging deeper into their relationship woes despite their earnest attempts to return to normalcy. The traps are being set for some crazy things to happen and, despite the stress (or maybe because of it), we’ll be watching.

Now that Savi (Alyssa Milano) and her husband Harry have decided to hold off on the baby making, their sex life is on the rebound. So much for that rut Savi mentioned last week. Yeah, right. Sex isn’t a fix-it, and Savi is carrying a lot of guilt.

Plus, her case gets moved up, and Dominic tells her she needs to prepare to live at the office with him so they can play catch up. Savi agrees to the late-night office meetings, but confronts Dominic about giving her some space. She’s blatantly uncomfortable around him, but she’s still attracted to him. She’s having dreams about sleeping with him, and her husband catching them in the act.

Savi proposes she and her husband go on vacation for a second honeymoon. They are too in debt to afford it, though, and Harry shoots down the idea immediately.

With the vacation out of the question, Savi tries to get out of her current case so she doesn’t have to partner with Dominic anymore, but the plan backfires. Instead of giving the case to Dominic, Savi’s boss puts her at the lead and pulls Dominic. Dominic goes to her house, clearly upset despite Savi’s honorable intentions.

The next morning, Savi takes a pregnancy test. It’s positive. Suddenly, the thing Savi wanted most is the worst thing she could get. 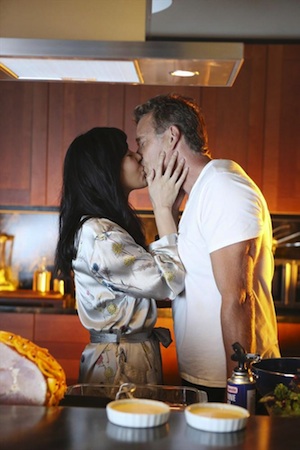 Joss’ new boss Olivier is immune to Joss’ womanly wiles, much to her annoyance.

When Olivier invites her to dinner, Joss thinks it’s a sign that he’s just pretending to not be attracted to her. At the dinner, Olivier wants to know why she has twice as many properties as everyone else in the company. Joss says it’s because she’s good at her job. Olivier knows better. (Joss had relations with her former boss, if you remember.)

Olivier tells her he’s taking half her properties and redistributing them to the rest of the staff. If Joss can manage to sell an impossible property that’s been on the market for 12 months, he’ll give her back her properties.

Joss decides to hold a Twilight Preview Party to hopefully sell the house. Joss transforms the house, which she refers to as “hipster hell.”

The party is a huge success. Joss gets three offers on the house that night and beats Olivier at his own game. This time, at least. We’re guessing this was only the first battle of an impending war.

Richard blows April off after she stood him up twice. Not that you can blame the guy. April tries to explain the situation without flat out admitting her husband was having an affair. Richard says OK, but doesn’t ask her out again.

Coincidentally, Richard is at Joss’ preview party, and April sees him. The two talk and rekindle the flame, but Richard recognizes that April has a lot of stuff she needs to sort out in her life before they date.

After the party, April goes to Savi’s place and the two talk it out. Savi admits how upset she is about the affair, and April tells Savi never to tell Harry the truth.

Karen’s sexy co-worker Jacob is taking an interest in her personal life, but Karen admits to Savi she’s unable to move on from Tom. Not that Tom’s widow, Elizabeth, and son, Sam, are making things easy for her. Elizabeth shows up at Karen’s office looking for a recommendation for a therapist for Sam. He dropped out of college and is planning to move into Tom’s place he kept in the city — the place where Tom and Karen had their affair.

Karen goes to the apartment she shared with Tom, worried that she left something there that could identify her as the mistress. As she’s rummaging in the apartment, Sam arrives. Karen hides from him and manages to make it out the door, but leaves her sunglasses behind. She can’t return to get them without Sam discovering her.

Karen finally wants to make an attempt to get over Tom and invites Jacob to Josslyn’s Twilight Preview cocktail party. Karen has a really good time at the party until she gets a call from Sam. He’s in the hospital.

Sam decided to drink and drive. He got his license taken away so Karen gives him a ride from the hospital. In the car, Sam tells Karen he found a pair of sunglasses in his dad’s apartment that he returned to his mom, but they weren’t hers. Now Elizabeth knows Tom was having an affair.