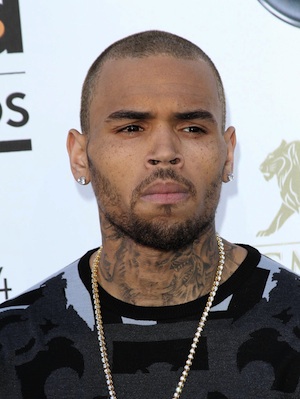 Aaliyah’s family not happy with release of posthumous song >>

Taking to Twitter last week, Chris explained, “the new single is apart [sic] of my ‘UNITY CAMPAIGN’ which encourages all races, genders, sexes, (everyone) gay or straight to love each other!”

This, of course, is in complete contrast to the gay slurs he insists on throwing around via Twitter.

Brown directed the video, which opens with two title cards — one a statistic on gun violence, the other a quote about peace, which is attributed to “Not CB, just Christopher.”

Primarily in black and white, for the most part the video only has two pops of color — red and blue — seemingly to represent the Los Angeles gangs Bloods and Crips.

Shot in Compton last month, Chris tweeted that he was “giving love back to the hood.”

Along with leading a gang of red-adorned and then blue-adorned guys through the streets of Compton, Chris dances while Aaliyah’s image is projected behind him.

He also turns into some sort of glowy-eyed dancer demon and then sits with a whole bunch of kids — representing the happy and peaceful future by wearing all sorts of colors.

Not too familiar with Aaliyah? Learn all about her here >>

With all of this talk of the video coming out against gun violence and gangs, you would expect some sort of statement to be made in the song or with the rest of the video.

But instead, Chris and Aaliyah sing about being best friends and being connected. It’s pretty much your standard R&B jam.

In fact, the only reference to gun violence is through the beginning title cards and an end graphic where Breezy pays tribute to friend and rapper Michael “Lil Frogg” Reshard, Jr.

“Don’t Think They Know “ is off of Breezy’s upcoming album, X, due to be released July 16.

Watch the video below and let us know what you think of Chris using Aaliyah’s vocals in his new song.