The Amazing Spider-Man is sticking around. The superhero’s staked his claim on the summer box office. You haven’t seen the last of Peter Parker and his alterego. 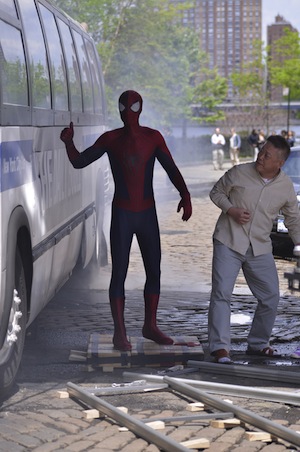 Spider-Man has nothing to pout about. America’s favorite webslinger has received Sony Pictures’ stamp of approval. Monday, the studio announced plans for not one, but two more sequels to The Amazing Spider-Man.

Director Marc Webb is currently shooting The Amazing Spider-Man 2, which is a follow-up to the 2012 reboot. It was then that Andrew Garfield took over the superhero reigns from Tobey Maguire. His first film grossed $752 million worldwide. That was more than enough to secure a follow-up.

In a press release, Jeff Blake, chairman of Worldwide Marketing and Distribution for Sony Pictures, said, “Spider-Man is our most important, most successful, and most beloved franchise, so we’re thrilled that we are in a position to lock in these prime release dates over the next five years.”

Chris Cooper signs on as the next Green Goblin >>