While the Kardashian clan remains mum on the details about their new family member, Dr. Oz offers the news parents some advice about raising a premature baby. 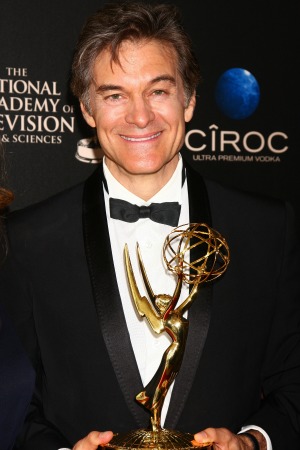 While fans are waiting to hear more information on Kim Kardashian and Kanye West‘s baby girl, there’s one person offering some advice. Dr. Mehmet Oz thinks the new parents need to take it easy with their premature infant.

The daytime talk-show host spoke with Us Weekly at the Daytime Emmy Awards and offered some personal advice.

He said, “I’ve been following Kim’s story, which I have a personal interest in aside from being a doctor. Our youngest child [Oliver] was born five weeks premature, so I know how hair-raising that is, and the most important thing to recognize is today, we can actually get kids to survive almost always, but if you don’t manage them really well early on, they can grow up to develop all kinds of issues.”

Other than grandmother Kris Jenner telling E! News, “We’re happy, everybody’s good and she’s beautiful,” there hasn’t been a lot of news about the new bundle of joy. This is rather unusual for a family that’s so public with everything they do.

Dr. Oz really thinks the couple should take a step back from the limelight.

He cautioned, “It’s sacred, those first few months, for all babies but especially for the premature. It’s a sacred time. They should focus on the child.”

As a doctor, he knows they don’t have an easy road ahead of them. He described his own journey with son Oliver once he was home.

The TV personality said, “He would turn blue and pass out, which would scare me. And I’m a doctor, so maybe they let him to my care [early], but it’s a little nerve-wracking.”

The original plan was to have mother and baby follow West around the globe for his tour to promote his new album Yeezus. Those plans will probably have to be modified to accommodate the baby girl who couldn’t wait to see the world.