Nigella Lawson’s husband Charles Saatchi denies charges of choking his wife after photos surface of him grabbing her neck during an argument at a London restaurant. 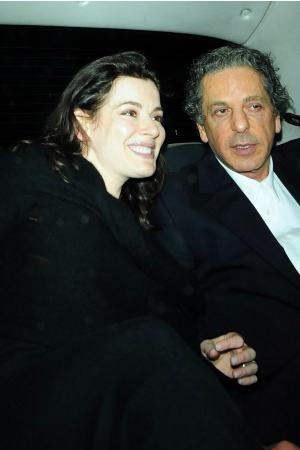 happened between celebrity chef Nigella Lawson and her husband, art mogul Charles Saatchi. The photos were taken nearly two weeks ago as the two were having lunch at a London restaurant. In the photos, Saatchi appears to be gripping Lawson’s neck as she regards him with a frightened expression.

Despite how the photos look, Saatchi is now trying to deny any accusations of abuse, claiming that they look much worse than what really happened. Saatchi spoke to Us Weekly about the incident in an effort to clear the air.

“About a week ago, we were sitting outside a restaurant having an intense debate about the children, and I held Nigella’s neck repeatedly while attempting to emphasize my point,” Saatchi explained.

“There was no grip, it was a playful tiff,” Saatchi insisted in the interview. “The pictures are horrific but give a far more drastic and violent impression of what took place.”

When asked about the frightened and tearful expression on his wife’s face, he said, “Nigella’s tears were because we both hate arguing, not because she had been hurt. We had made up by the time we were home. The paparazzi were congregated outside our house after the story broke yesterday morning, so I told Nigella to take the kids off till the dust settled.”

Though Saatchi has denied any wrongdoing, Scotland Yard has confirmed that they are investigating the incident, saying, “Officers from the Community Safety Unit at Westminster have already begun an investigation. Inquiries are in hand to establish the facts.”

As for Lawson, a rep for her only said, “We will not be commenting on the images.”

Between Lawson’s lack of comment and Saatchi’s strong denials, we’re not sure if we believe the incident was as innocent as Saatchi would like everyone to think. Grabbing someone’s neck to “emphasize” a point sounds extreme.

What do you think? Do you believe Saatchi’s claims about the possible choking incident?