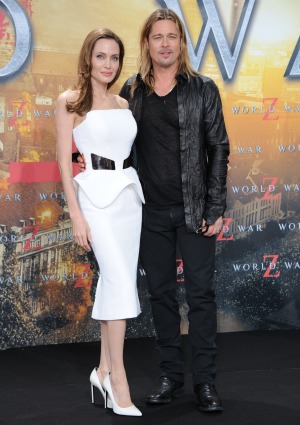 His partner and baby mama just went through a preventative double mastectomy, but Brad Pitt says Angelina Jolie is now focused on the health of other women now that her own future is more secure.

Jolie chose to undergo the radical surgery after discovering she carries the BRCA-1 gene, which gave her an 87 percent chance of developing breast cancer. Now she wants all women to have the same opportunity to potentially save their own lives, just like she did.

“Her focus now is that all people have access to the testing,” Pitt revealed during an appearance on Good Morning America to promote his new flick World War Z. “If you do your research it doesn’t have to be scary, it can be an empowering thing.”

Pitt said Jolie is totally recovered from the procedure and was back to her usual self by the time she penned the personal essay for The New York Times. “It’s business as usual, she’s doing great,” he said. “When she wrote that piece, we had already come out the other end.”

“It was a beautiful thing to watch.”

In the essay, titled “My Medical Choice,” Jolie revealed she underwent the preventative mastectomy on Feb. 16 and had reconstructive surgery April 20. She is reportedly considering having her ovaries removed in a bid to prevent the same type of cancer that killed her mother, also carried by the same gene. Her maternal aunt died of breast cancer earlier this month.

Jolie is already back on the red carpet, happily — and healthfully — supporting Pitt at the premieres of World War Z.