Miss Connecticut Erin Brady won’t be returning to her boring desk job today, while another contestant is facing public humiliation for an interview answer being widely mocked in the media.

Related story No, Miss USA, Health Care Is Not a ‘Privilege’ 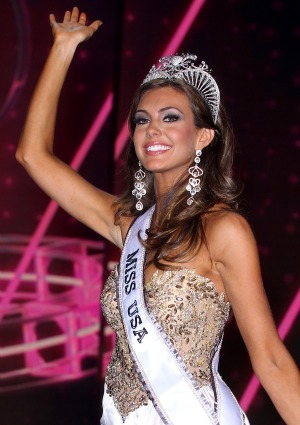 There is a new Miss USA this morning! Miss Connecticut Erin Brady took home the sparkling crown, beating out 50 other contestants all vying for the prize at Planet Hollywood in Las Vegas on Sunday.

The 25-year-old accountant wowed judges with her orange bikini, strapless gold-spangled evening gown with long white train, and the answer during the interview portion of the pageant, where she was asked what she thinks of the recent U.S. Supreme Court decision to uphold widespread DNA tests.

Did Ryan Lochte snag a date with Miss USA? >>

“If someone is being prosecuted and committed a crime, it should happen. There are so many crimes that if that’s one step closer to stopping them, then we should be able to do so,” she said.

Not faring so well in the interview portion was 21-year-old Miss Utah Marissa Powell’s answer when asked, “A recent report shows that in 40 percent of American families with children, women are the primary earners, yet they continue to earn less than men. What does this say about society?”

“I think we can relate this back to education and how we are continuing to try to strive to,” she said, stumbling, “figure out how to create jobs right now.”

“That is the biggest problem, and I think especially the men are seen as the leaders of this, and so we need to try to figure out how to create education better so that we can solve this problem. Thank you.”

As Miss USA, Brady hopes to use her influence to help children cope with the effects of drug and alcohol abuse in their families.

“I grew up in a family influenced by that and I think it’s really important to help the children of families that are suffering from those problems,” she told The Associated Press.