Too many things went down on Mad Men this week. Pete Campbell is clearly not sure how to handle everything that happened. 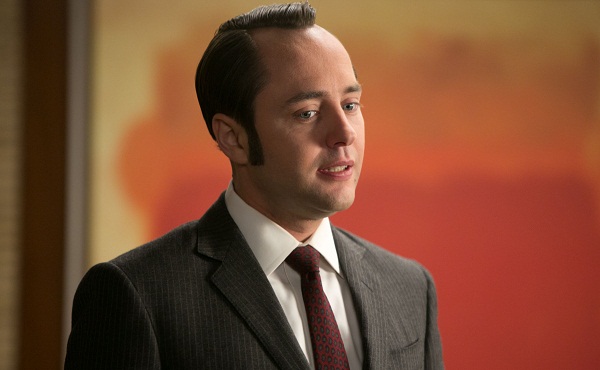 Oh, Mad Men. Where to begin?

Wait! I got it! They killed Ken(ny) Cosgrove. Actually… no, they didn’t. Apparently, the good ol’ boys from Chevy just shot out his eye? (There’s an eye patch… not sure if it’s completely gone or just severely injured from the spray of buckshot.)  Great line, “I hate cars. I hate guns. I can’t even look at steak anymore!” I couldn’t believe Pete Campbell (Vincent Kartheiser) didn’t say, “Well, think of it this way: At least you only have to look at it with one eye now.” The missed handshake was good enough, though. And, of course Pete stepped up to take Ken’s (Aaron Staton) place when he said he wanted out. Cooper’s response to the change-up was best, “Crocodile tears! How quaint.”

Though, Bob Benson taking Pete down a notch by telling him his admiration was waning, and that he needed to watch what he said to people, was pretty freaking great, too.

Things remained tense between Pete and Bob, especially after Bob hit on Pete last week. As Pete worked to try to nail down some other job prospects for Bob, Bob was in his own office making a phone call to Manolo, the nurse he recommended to take care of Pete’s mother. The next thing Pete knew, his mother was at the office, announcing she wanted to take a trip, demanding her passport and chastising Pete for being mean to Bob.

The most important new Bob Benson information: Everything SCLD had on him is a lie… or a grave exaggeration. One firm he worked for said he’d worked as a manservant and another said he was from West Virginia and his parents were probably siblings. Of all our Bob Benson theories, I think the one where he’s the son of Don and the prostitute is continually looking more and more likely. Though, perhaps “spy” is still not out of the question.

Plus, a new theory: What if Bob Benson and Jim Cutler are having a fling? Cutler seemed pretty happy with Benson this week and that one time he sent him along with Ginsberg… except for the time Benson told Ginsberg to show him some respect and Cutler jumped down Bob’s throat. …As if he didn’t want his boyfriend coming to his rescue, maybe? 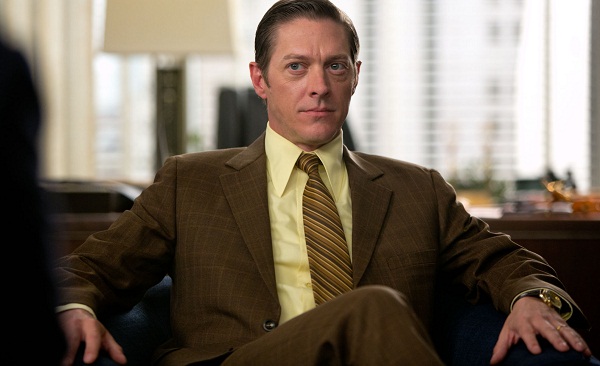 The Sharon Tate references popped up, again, this week when Don (Jon Hamm) and Megan (Jessica Paré) went to see Rosemary’s Baby and ran into Ted and Peggy. They were doing “research” for Peggy’s St. Joseph’s ad. Peggy (Elisabeth Moss) and Ted seemed to get progressively more giggly as they went along during the episode, making their attraction not just obvious, but annoying.

While Peggy’s ad idea for St. Joseph’s was great, it wasn’t worth the inflated budget she was suggesting to pull in a bunch of extra cast. Ted was so caught up in seeing her happy that he just wouldn’t tell her no.

It took Don, a drawn-out reveal at a meeting, and one serious confrontation before Don could bring Ted to his senses. We’ll see how long it lasts, though.

Megan theory: If someone is going to stab her to death a la Sharon Tate, my bets are on Glenn. …still working out the deets, but that kid is super creepy.

Sally’s shipping off to boarding school 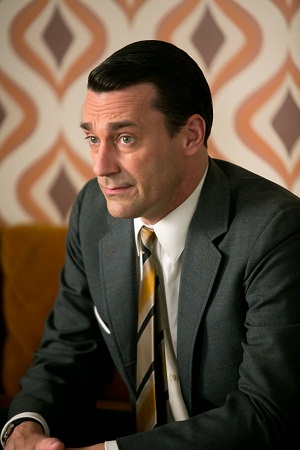 After everything that’s happened to Sally at Don’s uptown penthouse, she no longer wants to visit. That’s pretty rough, though, considering she also can’t stand to be in the house with her mother. So, she asked for what so many other teenage girls ask for: She wants to go to boarding school.

Despite Betty’s (January Jones) weirdly tense and hateful relationship for her daughter, she also wants her to have only the best. So, the Frances’ made some phone calls and soon enough Sally was paying a visit to the same boarding school Jackie Kennedy Jacqueline Kennedy Onassis attended to see how she liked it.

Her first encounter with the girls there were two bratty roommates who didn’t understand why Sally would show up without alcohol and weed to bribe them into giving her a good recommendation. Wanting their good word, Sally called up her buddy Glenn from the old neighborhood.

Want more TV news in your inbox? Sign up for our newsletters! >>

We’ve spent nearly five seasons waiting for Sally and Glenn to hook up. They’ve clung to each other since the very beginning. Sadly, though, Glenn went for Sally’s future schoolmate and left Sally with his creepy friend. When his friend got too handsy with Sally, however, Glenn pummeled him. So, perhaps there’s still hope! … Then, again, there’s all those references Betty has made to Sally being a lesbian.

One more thing: SunKist vs. Ocean Spray came to blows, again, and it looks like Don won that fight, after all. Poor Ted. Womp womp womp.

Phew! I think I nailed all the most important stuff, right? Did I miss anything?

Here’s what I’m wondering, though:

What do you think of Sally?
She’s one of my favorite characters on Mad Men, honestly. That said, I thought her comment about how her father never gave her anything was a little snotty. He messed up with Sylvia (and all the others she doesn’t really know about) and he recognizes her anger. Instead of making her deal with it, he’s paying for her to flee and go to boarding school. While he recently admitted a lack of undying love for his children, he still put a really nice freaking roof over her head. He also taught her how to make a Tom Collins. Father. Of. The. Year.