With all of her success, it’s sometimes easy to forget that Selena Gomez is young enough to still be welcoming new siblings. She announced on Twitter that her mom gave birth to a new baby girl on Wednesday. 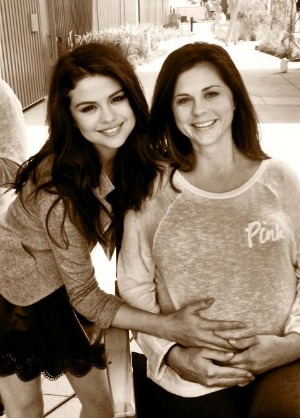 It looks like Kimye isn’t the only celebrity family to welcome a new baby this week. Selena Gomez tweeted some baby news over the weekend: She now has a new baby sister!

“Momma, Brian, and me are all so grateful for all your well wishes,” Gomez tweeted on June 14. “My lil sissy Gracie Elliot Teefey was born on June 12th. Luv you all XO.”

The timing of the announcement, made two days before Father’s Day, was apropos since the pregnancy was announced by Gomez on Mother’s Day of this year.

“Hope all the amazing moms had a great day! I have the best momma in the world :)) I love you so much!” Gomez tweeted at the time, along with a photo of her hand on her mom’s belly, according to the Huffington Post.

Gracie Teefey is the daughter of Gomez’s mom, Mandy Cornett Teefey, and her husband, Brian Teefey. The couple has been married since 2006, and this is their first child together.

Gomez has shown her love for Justin Bieber‘s younger siblings throughout the past few years, and she has a lot of experience being a big sister. Her friend — and former fellow Disney star — Demi Lovato tweeted her excitement over the new baby.

Gomez has had a lot to look forward to this year. She been expecting not only a new baby in her family but also a new album. Stars Dance is expected out July 23.

Now after the birth of Gracie Teefey, as well as Kim Kardashian and Kanye West‘s new baby, we are looking forward to the most anticipated birth of the year (or decade): the royal birth!