Nothing like a little father bonding to celebrate the return of True Blood and Father’s Day. Bill may have become Billith, but that doesn’t mean he’s giving up his protege. 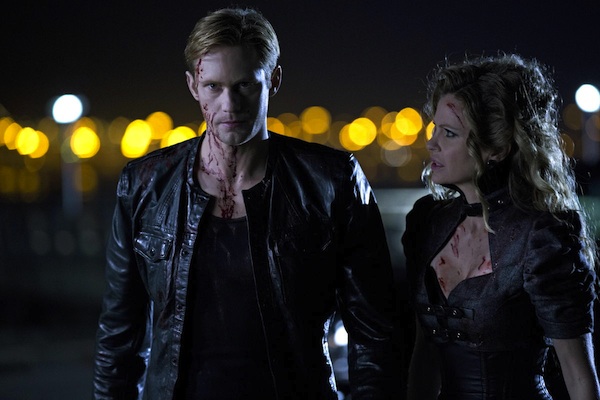 True Blood is finally back! And, though the show’s premiere happened to be on Father’s Day, the episode was strangely fitting.

Season 6 picks up right where Season 5 left. Bill (Stephen Moyer) has become Billith. Sookie (Anna Paquin) and Eric (Alexander Skarsgard) watch the puddle of blood goo re-form to Bill. Then he sort of demon-animal-like wails at them. They get the hint to run.

Our other heroes — Jason, Nora, Pam, Tara, and Jessica — manage to escape as well. Just in time, too. As they run to their getaway car, with Eric and Sookie behind the wheel, a fire breaks out in the building, causing an explosion. Billith also makes it out alive, though Eric doesn’t offer him a ride.

True Blood, and we mean the blood, is back

Given the True Blood factory explosions, the governor of Louisiana institutes a vampire curfew, which requires all vampires to stay indoors after sundown. He also mandates all vampire-run businesses be shut down (which means Fangtasia).

Behind closed doors, the governor also offers the True Blood producers access to his private factory. He wants to begin production of True Blood again for the sake of garnering revenue for the state. It also won’t hurt with poll numbers and reelection.

After the group escapes, they pull over to discuss a game plan. Nora confides to Eric that she thinks Jason is hiding something. Nora is suspicious because Jason knows the name Warlow, which is mentioned in the book of Lilith. Nora compels Jason to tell her what he knows, but the only information Jason can give is that Warlow is the vampire who killed Jason’s parents. Nora reveals that Warlow is the protege of Lilith and one of the first vampires.

Jason realizes Nora compelled him and is angry. He runs away from the group after Sookie defends Nora.

Jessica is summoned by Bill so forcefully that she’s almost ripped to pieces. Sookie goes with her.

Andy tries to be a good daddy 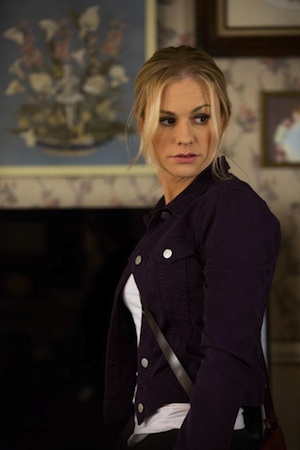 Back in Bon Temps, Andy has Arlene helping him with the half-faerie babies, but she isn’t happy about it. He’s feeling insecure and scared about all the responsibility, until Arlene coaxes him to give it a try.

Andy is just beginning to feel like he’s getting a handle on the babies when they are no longer babies. Overnight, his children turn into toddlers. Don’t worry, we don’t get it either.

Sam takes Emma back to Merlotte’s and finds Lafayette, who cares for Emma.

Sookie and Jessica arrive at Bill’s house. He’s waiting for them on the back porch, but Eric and Nora are waiting for Bill in the shadows. They strike at Bill, trying to kill him. Bill grabs Eric and is choking him. Sookie stabs Bill in the back with a stake. Bill simply pulls it out and asks them if they can talk now.

Jessica wants to stay with Bill. In fact, she insists everyone else leave his house. Nora, Eric, and Sookie agree only because they don’t have another option.

Bill tucks Jessica into bed that night, and asks Jessica to help him keep his sanity. Jessica almost drops a glass off the nightstand and Bill stops it from falling with his mind. Bill doesn’t understand his new powers more than anyone else and needs Jessica to keep him honest. Jessica agrees.

That night, Bill has flashes of being tortured. He then sees Lilith standing in his house, and she enters inside of him. Something tells me good Bill isn’t going to last long no matter how hard Jessica tries to put him in his place.

Eric gives Sookie her home back and writes the contract in blood. He asks her to stay away from Bill. She agrees, but also says she wants her old life back. She wants to be the girl in the white dress who walked into Fangtasia. Because of that, she rescinds Eric’s permission to be in her house.

Nora witnesses the whole display between Sookie and Eric. Eric tells Nora to respect Sookie’s wishes and stay away from her. Nora knows Eric is in love with Sookie. She is his weakness.

Jason hitchhikes home with a strange man who asks questions about Jason’s family.

After Jason spills his vampire story, he realizes he’s in the car with Warlow. As soon as Jason puts the pieces together, Warlow disappears from the driver’s seat.