Not only did HBO spend the day tweeting pictures from the set, it also premiered its first ever live broadcast from Fangtasia, featuring all your favorite True Blood cast members. 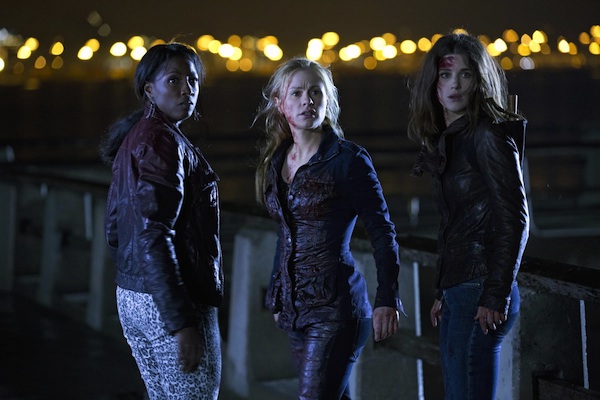 True Blood isn’t holding back this season. With the Season 6 premiere on Sunday night, 13 members of the cast — including your favorites like Anna Paquin, Stephen Moyer, and Alexander Skarsgard — answered questions and revealed exclusive details from the set of Fangtasia.

Here are some highlights of the Q&A session:

Question for Alexander Skarsgard, who plays Eric: First season Eric was evil, then amnesia Eric wasn’t — do you think this season’s Eric is a nice mix of both or more evil?

Alexander Skarsgard: I’d say the old Eric is pretty much back. But the amnesia changed him fundamentally, and he’ll always carry that experience within.

If you had complete control over what Eric said and did, what would you have him do?

AS: Eric goes undercover in a scene in Episode 602. Had a blast shooting that. So I’d say more undercover Eric. Maybe as an old lady. Kinda like Dustin Hoffman in Tootsie, sweet and charming. But then eventually he’ll rip some poor guy apart, of course…

Question for Rutina Wesley, who plays Tara: Has the dynamic between Sookie and Tara gotten less tense this season and more to the way they used to be?

Rutina Wesley: Well, you’ll have to watch and see, but I think they will be best friends forever and Tara will hopefully come around and forgive Sookie, who was only trying to save her.

Question for Todd Lowe, who plays Terry, Chris Bauer, who plays Andy, and Ryan Kwanten, who plays Jason: As the three “normal” human men in Bon Temps, do you feel jealous that the other guys get to play supes?

How do you get yourself in character before taping an episode? Do you have a routine you always do or do you like to mix it up?

TL: Um. In response to the previous question, I get jealous of the supes, and then I don’t exercise.

Question for Nelsan Ellis, who plays Lafayette: Will Lafayette find love after Jesus, and will he embrace and learn about his supernatural abilities?

Nelsan Ellis: Yes, he will.

Will Lafayette learn to control his inner demon?

What does the Tru Blood drink taste like? What is it made of?

NE: The Tru Blood drink is a sort of orangy syrupy soda. I like it, but couldn’t drink too many of them. Would give me a tummy ache.

Which character who’s been killed off would you bring back if you could? Why?

Sam Trammell, who plays Sam: I’d love to be able to bring back Michael Raymond-James who played Rene Lenier in Season 1. He had such a good Cajun accent and Southern feel. He really helped ground the show.

Were your questions answered? What would you have asked if you had the chance?