300: Rise of an Empire picks up where 300 left off. It’s an epic action adventure full of buff warriors. Here’s a first look at footage from the film. 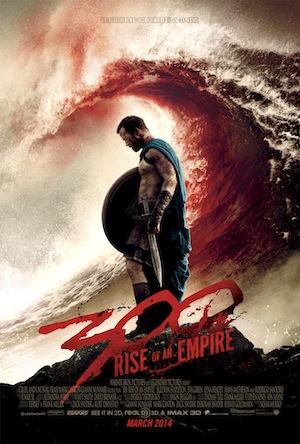 Warner Bros. has finally released the first trailer for 300: Rise of an Empire. It’s in the same movie family as the 2007 hit 300. The original was directed by Zack Snyder and made Gerard Butler a star. This time around, Noam Murro is behind the camera, while Snyder has both a producing and writing credit.

Unfortunately, Butler isn’t headlining this action-fest. Instead, Australian actor Sullivan Stapleton (Cinemax’s Strike Back) stars as the Greek admiral Themistocles. Fans can still expect to see familiar faces such as Lena Headey (Game of Thrones), Rodrigo Santoro and David Wenham, who are all reprising their roles from the first film.

Once again, Santoro will play the villain Xerxes, the Persian “god king.” Rise of an Empire centers on his battle with Themistocles, but it also dives into his backstory. Not much is known about his mysterious origins. Some new notable cast members include Eva Green, Callan Mulvey, Hans Matheson and Jack O’Connell.

The original 300 had a production budget of $65 million and grossed over $456 million worldwide. We knew a sequel or spinoff wouldn’t be too far behind. The film debuted in theaters March 9, 2006, nearly eight years to the day before its successor will premiere.

Check out the first trailer for 300: Rise of an Empire below

What do you think of the footage? Will you be seeing the movie?