When a little boy visits the set of Robert Downey Jr.’s new film, he hopes to meet his hero Iron Man. But one look at the actor without his mask and the little guy bursts into tears. 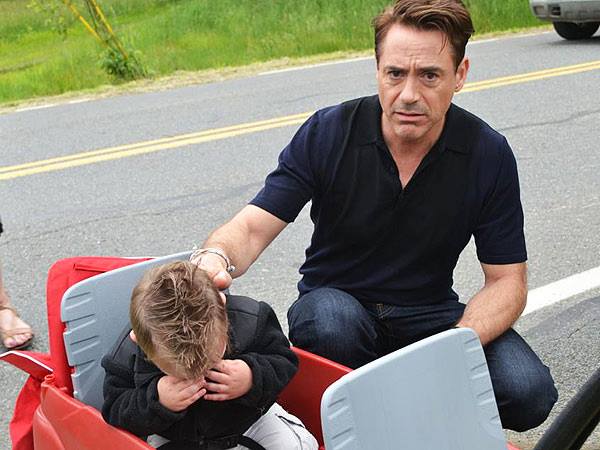 Robert Downey Jr. doesn’t usually have to worry about making kids upset by his appearance, not since
he took on the role of iconic comic book character Iron Man. Since then, Downey has had kids and adults alike clamoring for pictures and autographs and he’s always seemed very willing to give them exactly what they want, and has made a lot of people happy in the process.

This week, Downey had quite a different response when a little boy visited the set of his new film The Judge. Boston.com reports that Downey inadvertently made 18-month-old fan Jaxson Denno burst into tears when he met the toddler without his trademark Iron Man suit.

Jaxson’s mother, Heather Denno, brought the little boy down to the Western Massachusetts set where Downey was filming so that they could try to get a photo of the actor. True to form, when Downey noticed the toddler, he immediately came over to say hello and was greeted with tears, rather than a smile.

It seems little Jaxson was hoping to meet the real Iron Man, red suit and all, and not just some guy in jeans and a T-shirt. The toddler’s mom explained what happened. “I said to my son, ‘Hey, here’s Iron Man,’ but he didn’t have the red suit on. So Jaxson put his hands over his face and got upset.”

Battle of the flicks: Iron Man 3 VS. The Iceman >>

But rather than blame Downey for the incident, Denno had nothing but praise for him. “He was amazing. You could tell he was a father,” she said.

Apparently Downey did eventually win the kid over and was able to coax a smile back onto little Jaxson’s face.

Image courtesy of 101.3 The River/Facebook