Hannibal bonds with Abigail as he misguides Jack to believe that Will Graham is the copycat killer. 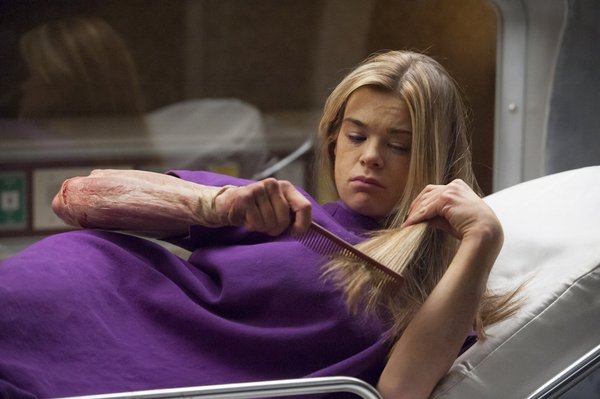 There are many reasons why it’s dangerous to get close to an intelligent, powerful, and well-respected serial killer (aside from the potential of becoming his next victim). Hannibal (Mads Mikkelsen) proves this when he convinces Jack (Laurence Fishburne) that Will is actually the dreaded copycat killer.

It’s pretty clear that Hannibal’s been putting in the work for the past several weeks to represent Will as a man on the verge of a breakdown who is struggling both mentally and emotionally. But he’s done so in such a delicate manner that it would be hard for anyone around him to suspect him of such a devious plan. Jack has brushed off Hannibal’s warning on several occasions because he knows he needs Will’s expertise to track down the Chesapeake Ripper and finally bring that psycho to justice.

Jack also has some sneaking suspicions of his own about Will’s relationship with Abigail Hobbs. He also is inappropriately protective of her. Jack relays his concerns to Hannibal, having no idea that Hannibal and Abigail have embarked on a dysfunctional relationship of their own.

Hannibal explains to Jack that Will feels like he is becoming Garrett and since Garrett wanted to kill Abigail, perhaps Will is considering doing the same thing. Jack goes to the hospital to see Abigail, but Will has already taken her away. This seems to only confirm their suspicions that Will is dangerous and shouldn’t be trusted with the young girl.

Abigail does leave Will, however, and rejoins her new serial killer BFF. She has figured out that Hannibal killed her friend Marissa, which he quickly cops to. He even admits to killing more people than Garrett Hobbs ever could. But, then he lies to her and tries to convince that Will is the copycat killer.

Stay up to date on your fave TV shows! Subscribe to the SheKnows newsletter >>

Despite Hannibal’s moving, yet unnerving unemotional speech to his own therapist last episode, he really seems to have no intention of making Will his “friend.” Will now has the FBI and most important Jack Crawford on his tail and there’s no doubt trouble will be brewing in next week’s season finale.

He may not be the copycat killer, but is Will Graham slowly becoming that which he’s feared the most?