Laura Linney’s put Hollywood in the hot seat. While being honored at an awards ceremony, she shone a light on its biggest flaw — gender inequality. 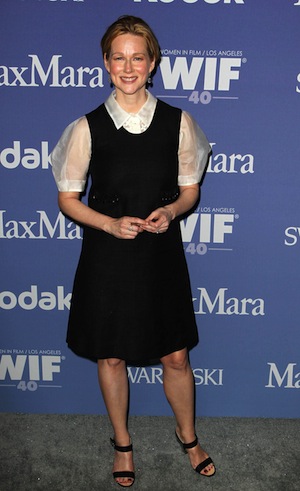 On June 12, Hollywood came out for Women in Film’s Crystal + Lucy gala. It’s an annual fundraising event that celebrates some of the industry’s brightest talents. One of the recipients was three-time Emmy winner and Academy Award nominee Laura Linney.

The actress was presented with the 2013 Crystal Award for Excellence in Film. When Linney approached the podium, she put her speech time to good use. She pointed out some stubborn truths that still plague the industry and shed a light on the lack of women in power — and the lack of sisterhood.

“As an actress in film, it is very easy to become isolated just due to the ratio of gender inequality that exists. Rarely do you have a scene with other women, very few women are on the crew, and what few female executives arrive tend to keep to themselves,” Linney explained. “You have fewer and fewer women to turn to for help or advice, and information is not easily shared.”

She went on to discuss how film is a male-dominated industry. She spoke about her early Hollywood experiences, where male producers put her through the wringer. She remembered her hair color being a major issue. One moment it was too blonde and the next it wasn’t blonde enough. Her talent took a backseat.

How do we rid ourselves of this ridiculous system? Linney’s answer was pretty simple: Support each other.

“I encourage everyone in this room to please mentor. Reach out to a younger actress, or junior executive, or crew person, or office worker or a student… take them to lunch, put in the time to talk and learn what they are encountering. Listen to their observations. Share with them your insight and your mistakes and share information so that our experiences are not wasted.”

Those are wise words from a wonderful lady!