A very pregnant Kate Middleton made her last public appearance before the birth of her baby, and her look was spot on! 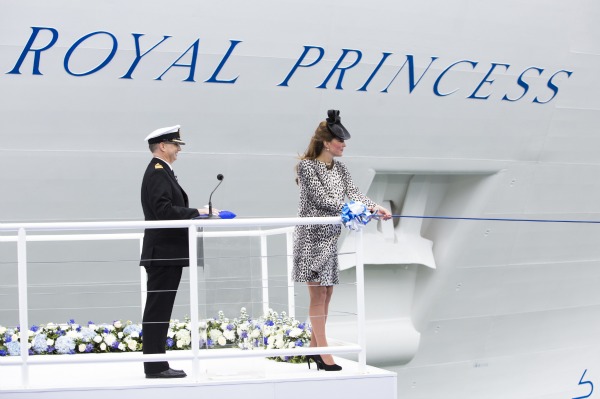 Catherine, Duchess of Cambridge and Perfect Hair At All Times made her final public appearance today before the birth of the royal baby.

Glowing and happy in a sassy black and white dalmatian print coat, the former Kate Middleton christened the new Royal Princess cruise ship with a $2,000 bottle of Nebuchadnezzar of Moet et Chandon champagne, a size equivalent to 20 standard bottles.

The original Royal Princess was christened by her late mother-in-law Princess Diana in 1984.

Receive a text alert when the royal baby arrives! >>

Kate was also named godmother of the ship, an ancient practice bestowing luck on the ship and its crew.

“Appointing a godmother to name a new ship is one of maritime’s oldest traditions,” said Paul Ludlow, U.K. Director of Princess Cruises, in a press statement.

“Historically their role is to be entrusted with the safe guidance of a vessel and its passengers. We are thrilled to welcome HRH Duchess of Cambridge, godmother to Royal Princess, to Southampton and look forward to celebrating this historic occasion.”

“It is a great honor for Princess Cruises that Her Royal Highness The Duchess of Cambridge has accepted our invitation to become the Godmother to Royal Princess,” added Princess Cruises CEO Alan Buckelew.

“We are delighted that the Duchess will launch our new ship and can think of no better way to celebrate our company’s British heritage and our commitment to the country.”

Kate Middleton at the Coronation celebration: See the bump! >>

The ever-fashionable Kate refused to look dowdy or awkward in her final stages of pregnancy. She paired her $265 coat from high street retailer Hobbs with what appeared to be a white dress peeking out from under the hem, her trusty black suede pumps and black fascinator.

Kate was joined by children from the East Anglia’s Children’s Hospice, one of Kate’s charities.

As the champagne bottle was released to smash the side of the ship, Kate said, “I name this ship Royal Princess, may God bless her and all who sail in her.”

The Duchess is now officially on maternity leave, and our next sighting might not be until she and Prince William appear on the steps of the hospital with their new bundle of joy — the royal baby is due in July.