The Goo Goo Dolls are back with their new album Magnetic, which features an array of emphatic singles. Their gripping ballad “Bulletproofangel” is our top pick. 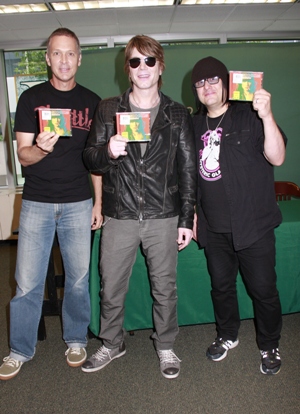 The Goo Goo Dolls‘ new album is the only thing anyone can talk about right now! Dubbed a “real New York record” by the band, most of the album was cut in Times Square. As a result, lead musician John Rzeznik is quoted on the band’s website as saying: “You’re at the cultural epicenter of Western civilization. It was unbelievably stimulating.”

That stimulation apparently helped them hit the jackpot with creativity, as it would explain why this album is so thought-provoking and multifaceted.

Want to find more albums like this? Why not stay up to date on releases by signing up for our newsletter? >>

Personally, I had a very difficult time trying to narrow down my pick for the album. The tracks “When The World Breaks Your Heart” and “Caught in the Storm” made a close second and third, as they were both radio-friendly and lively. But my heart stopped momentarily when I heard their ballad, “Bulletproofangel.” If you want to hear a preview of the album (and decide for yourself), check out this video below.

“Bulletproofangel” was co-written by John Rzeznik, Andy Stochansky, and collaborated with orchestrator Joel McNeely. Disturbingly haunting violins prompt the song, until it clears for a warm welcoming of piano and guitar melodies. The violins later compounded with a background choirlike vocals made me wish “Rebel Beat” was not the song the band headlined the album with. And for Rzeznik to be a 47-year-old vocalist and still possess a raspy boyish innocence ? this track is the perfect storm.

Like ballads? Check out these first dance recommendations for your wedding! >>

But what is “Bulletproofangel” about? Well readers, this is where I want you to help me. I want you to tell me how this song makes you feel, and what you think the band intended the message to be. My initial reaction after listening had me comparing the single to Ed Sheeran‘s “A Team.” Is this even a love song? Is he talking about a literal angel? A woman he loved who had unwavering optimism and grace like an angel? Take a listen and shoot me your thoughts. I’d love to hear them!

Ed Sheeran has been getting busy with Taylor Swift?! >>

Get as much of the album in as you can since The Goo Goo Dolls will be already be on tour this summer!

Bored with what music has to offer? Spruce up that playlist by checking out some of these other music reviews: