If Halle Berry was planning to keep the sex of her second child a secret, she’s out of luck! Olivier Martinez spilled the beans while talking about birth plans. 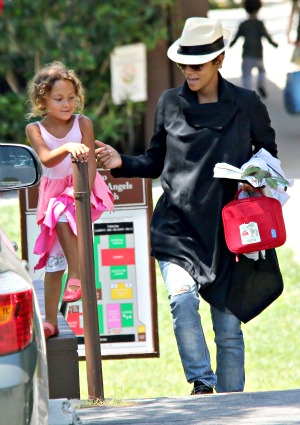 Halle Berry‘s 2013 pregnancy is far enough along that she and fiancé Olivier Martinez have found out whether they’re having a boy or a girl!

Revealing that Nahla, the star’s 5-year-old daughter from a previous relationship with model Gabriel Aubry, is going to have a little brother, the dad-to-be opened up about where his lady love plans to give birth.

“My son will be an American, but I remain French,” Olivier Martinez told People on Wednesday during an interview that quite appropriately took place in Paris.

Referencing the way the press treats stars in his home country versus the States, the 47-year-old continued, “I’m French — it’s less important. Meaning, I remain a Frenchman in America, but I adapt to American culture. I feel good there — but I’m still a foreigner.”

Just to make that clear, he reiterated: “My son will be an American.”

Halle Berry baby bump spotters need to be on high alert, as the 46-year-old is expected to walk the Champs-Elysées Film Festival red carpet by her future husband’s side on Thursday, June 13.

The baby boy news may not be an entirely welcome bit of information for the soon-to-be big sister, however. Last fall Nahla’s mother explained, “Every night, we do our prayers. We pray to God, so sweet. She says, ‘God, please bring me a bunk bed and a baby sister.'”

Here’s hoping the young sweetie will come around once her half-brother arrives this fall!

What name do you suggest for Halle Berry’s baby boy?