Anna Paquin and Stephen Moyer have done their best to keep their twins away from the paparazzi. But it was dad who accidentally revealed their names on the red carpet. 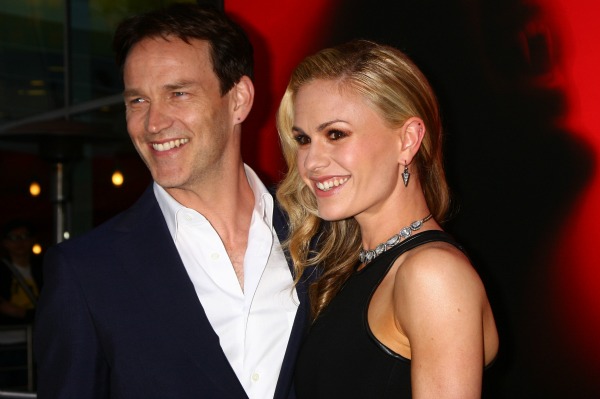 The babies were born 10 months ago, but Anna Paquin and her husband, Stephen Moyer, have been very private about the twins’ names. However, at the Season 6 premiere of the HBO show True Blood, one of the parents accidentally revealed their names.

In an interview with E! News on Tuesday night on the red carpet, Moyer slipped up when discussing his Father’s Day plans.

The actor shared that he would be “hanging with Poppy and Charlie.” Paquin didn’t seem ruffled by the misstep — she jumped right in with her plans for dad’s big day.

Paquin said, “I can’t tell you because that would ruin the surprise. I don’t know about [it being a] big surprise, but yes, there are plans.”

It also seems that dad has an affinity for floral names for his daughters. In addition to 10-month-old Poppy, he also has a 10-year-old daughter named Lilac. His 12-year-old son is named Billy. Both of his older children are from a previous relationship.

Now that the world knows the celebrity twins’ names, don’t expect the parents to be parading the siblings all over town for the paparazzi to photograph. Both Paquin and Moyer have done their best to keep their son and daughter shielded from the press.

Anna Paquin is happy to hook up with hubby on-screen >>

The 43-year-old dad explained to People why they wanted to keep the twins out of the media.

Moyer said, “They came much earlier than we were expecting. They were so fragile in the beginning. We are just trying to protect them.”

“[We’re] trying to give them as much of a normal upbringing as you can in this town, ” he continued. “They didn’t choose to be actors — not yet! Who knows what they’ll be? It’s just a question of wanting to keep that private for them so they can choose.”

Tell us: What do you think of the twins’ names?