From swan dress to moon child, Bjork sonically explores the science of the natural world in her Biophilia tour. Crazy wigs went barely noticed when the audience eyed a giant Tesla coil above her head that was choreographed to spark to the down beats. And then there were the pyrotechnics. Say what you will about her fashion choices — this woman knows how to put on a show! 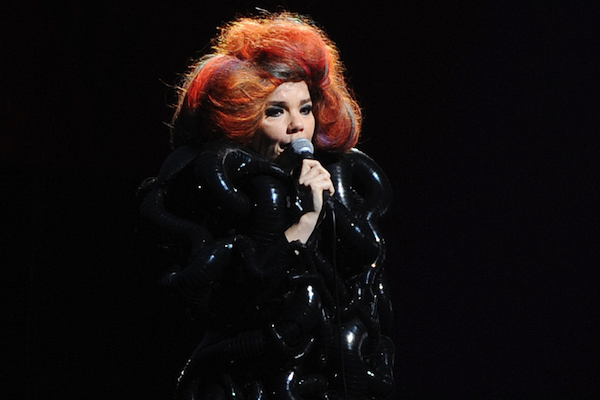 Last night at the Hollywood Bowl, a beautiful amphitheater nestled in the Hollywood Hills, Icelandic singer Bjork performed for nearly 18,000 Angelinos in what could be the best concert of 2013. I say concert, but her show is much more than a group of musicians performing their songs. Bjork is an innovator and not only incorporated video into the show but also included sounds of real lightening, electronic bongos, a Tesla coil and some of the strangest costumes ever designed for a songstress.

Bjork’s most recent album/collection of iPad apps is called Biophilia and explores the relationship between human beings and other living organisms. It’s really an exploration of life science, and the app features one “video game” for each of her 10 songs. The app is an exciting new way to experience her music. 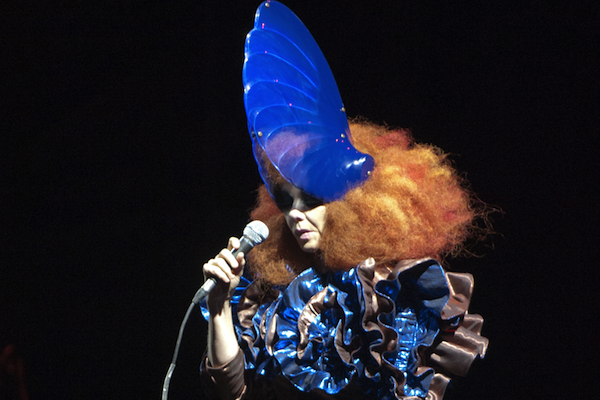 Before the Scandinavian siren entered the stage, a written notice flashed on a video screen. It read, “At the Artist’s request please refrain from taking any photographs or recording images. This is distracting to Bjork and she would encourage you to please enjoy being part of the performance and not being preoccupied with recording it. Images from this show will be available at: www.Bjork.com.”

OK, so you’ll have to go to her site to see exactly what she was wearing, but it’s worth the extra keystrokes. For most of the show, she rocked a flesh-colored bubble dress that evoked the image of a lunar landscape. Her wig was a mass of emerald and cobalt curls resembling a lush ball of sea grass.

For her encore, Bjork came back onstage donning an indigo cape and truly otherworldly headgear — her head looked as if it had been swallowed by a clear, spiky sea urchin.

As for the music, her set list was as follows:

For her encore, she sang the following through her sea urchin headdress:

Sonically and lyrically, her songs on Biophilia are solid and surprising but not quite as enthralling as some of her older songs, like “Hunter” or “Pagan Poetry,” so it was a thrill that she included them. She performed “Unravel” to a techno pop beat, transforming the heart-rending ballad into a dance-worthy disco tune.

Bjork’s unusual voice instills her songs with guttural purrs, shrieks and screeches, often rifting through the minor keys or atonally settling between the notes. But in her performance of the emotionally powerful “Joga,” her voice was purely on pitch and downright stunning. It was as if she channeled her inner opera singer, but leave it to Bjork to surprise.

The sonic princess’ encore ended with the punk rock song “Declare Independence.” The lyrics urge the natives of Greenland to fight for their rights and declare an independent state from ruling Denmark, but the raw power of the rebellious music had me jumping and singing in my seat. Then the fire cannons blasted from the back of the stage, adding that extra thrill and sense of danger. I could feel the intense heat from my seat — and I liked it.

Bjork’s Biophilia tour continues through North America through July. Catch it if you can!