Miley Cyrus calls in to a radio station denying rumors that she’s involved with Justin Bieber, announcing that she’s engaged and firing back at Amanda Bynes. And she does all of it in less than a minute.

This morning Miley Cyrus called into radio station Hot 99.5 in Washington, D.C., and answered questions about the 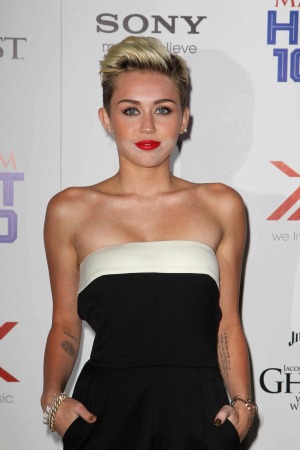 rumors going around that she and teen star Justin Bieber might be more than just friends. When asked if the rumors were true, Cyrus denied it immediately. “I’m engaged,” she said with a laugh. “That’s impossible. I’m engaged.”

She didn’t mention just who she’s engaged to, but we can all guess who her fiancé is. Which is great news, since not that long ago it was rumored that Cyrus and Liam Hemsworth had broken up. But it looks like that one isn’t true if Cyrus is running around telling radio stations that she’s engaged.

In the recording up on TMZ, you can also hear Cyrus talking about the very troubled Amanda Bynes. When asked to comment on her name being added to the Twitter tirade that Bynes has going on against everyone from Rihanna to Courtney Love and even her own parents, Cyrus said, “I think it’s all so sad that I don’t want to add any fuel to that fire.”

Cyrus apparently wanted no beef with Bynes and said that she had even been “rooting for a comeback until she started attacking me,” adding that she “thought it was hilarious that [Bynes] mentioned my name when I was a worldwide trending topic on Twitter.” Cyrus claims that Bynes was just trying to ride on her coattails, adding, “The moment you’re a trending topic, it’s funny how many people want your name to come out of their mouth because somehow they can be a trending topic.”

Considering the things that Bynes has been saying, Cyrus handled the whole thing pretty well.