The woman who says she slept with Kanye West during Kim Kardashian’s pregnancy joined Twitter today to defend herself. 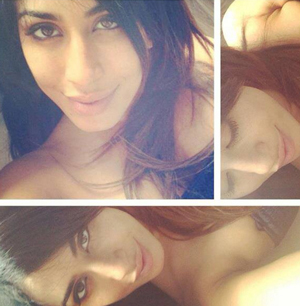 What’s the next step after telling a tabloid all about your sexual escapades with a famous rap star? Well, joining Twitter, of course!

Aspiring Canadian model Leyla Ghobadi signed up for an account a few hours ago to defend herself against all the haters she’s getting for claiming she slept with Kanye West recently.

The 24-year-old brunette revealed the dirty details to Star Magazine yesterday and included a picture of herself with West. She told the outlet that she was sleeping with the rapper while he was dating Kim Kardashian, and even after Kim got pregnant.

Leyla says she met Kanye at one of his concerts in July 2012 after he picked her out of the crowd, and that they’ve been in contact ever since.

She says Kanye told her he was only dating Kim for publicity and to “increase his fan base.”

On her new Twitter account, Leyla states that she’s not speaking out for “The Fame,” but to inform the supposedly naïve Kardashian about her soon-to-be hubby’s extracurricular activities.

Despite backlash from Kardashian fans, Leyla is sticking to her story.

Update (as of 4 p.m. PST): Leyla has tweeted that she will explain in detail what happened if she hits 1,000 followers. Think she’ll do it?

What do you think? Did Kanye cheat or is this Leyla character trying to boost her own career? Take our poll!