We’re getting conflicting reports about Kate Upton and Maksim Chmerkovskiy dating, but which is right? We’ll let you decide. 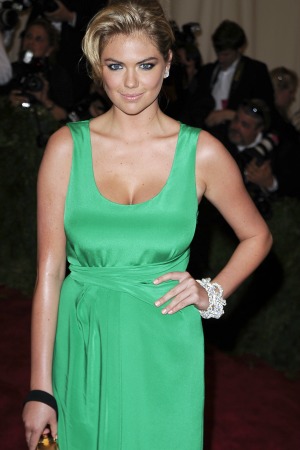 Chmerkovskiy. The two were spotted out for dinner together at Scalinatella in New York City recently. A source reportedly told Us Weekly, “They were very canoodly… It was a very intimate meal.” An eyewitness to the dinner claims that the couple held hands throughout their meal.

Multiple reports say that the two have become very close in recent weeks after mutual friends set them up on a date, according to Starpulse.

But don’t get your hopes up too much, romance lovers. There are other sources who are saying that the rumors aren’t true at all. E! News reports that multiple sources have confirmed that Upton and Chmerkovskiy are just friends and not dating at all.

One source reportedly told E! News that the two “are just good friends,” while a second source (who is close with Chmerkovskiy) revealed that they’ve “heard nothing about them dating.”

Also, remember the story of the couple having an “intimate” meal that was “very canoodly?” It turns out that the management at the Upper East Side restaurant has debunked that report, saying that the couple’s dinner did “not look intimate at all.”

In fact, the restaurant could not even confirm that it was Chmerkovskiy who was seen eating with Upton. But they did say that the two dinner guests appeared to be “just friends.”

Talk about not knowing which story to believe. It’s possible that the two are dating, but just trying to keep it under wraps for now to see where the relationship goes. But it’s also possible that they’re just friends.

Upton, who just turned 21 on Monday, was also recently rumored to be dating Sean “Diddy” Combs.

Which story do you believe? Do you think Upton and Chmerkovskiy are dating, or just friends?