U2’s Bono is working to help end world poverty, and he now has the help of 50 of his best friends lending a hand, just in time for the G8 summit. 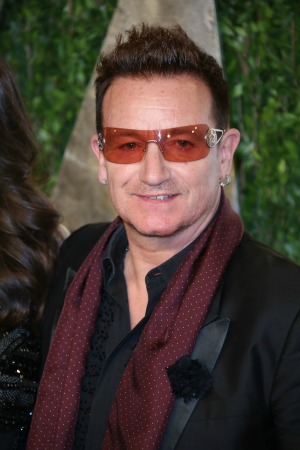 Bono has long been an advocate for many global issues, especially for those in less fortunate situations. The U2 lead singer is at it again, and is planning to bring awareness to world hunger issues when eight of the wealthiest countries in the world plan to meet in Northern Ireland next week.

Bono’s group ONE is planning to show up at the G8 Summit.

“ONE is a grassroots campaign of more than 3 million people committed to the fight against extreme poverty and preventable diseases,” said the group.

The Irish musician is passionate about the cause, and has enlisted some of the biggest names in music to put together a compilation for the summit. Macklemore & Ryan Lewis, will.i.am, Mumford & Sons and Ed Sheeran have all signed on so far for the ONE campaign called agit8.

The agit8 compilation contains more than 50 protest songs, both old and new.

According to MTV, the compilation features old songs being covered by new artists, as well as new music. Ed Sheeran covered Bob Dylan’s “Masters of War,” and Mumford & Sons teamed up with Elvis Costello to cover Bruce Springsteen’s “The Ghost of Tom Joad.”

Macklemore & Ryan Lewis were among those who decided to contribute original music to the album, with their song “Same Love.” According to MTV, other original songs include Kanye West’s “Diamonds From Sierra Leone,” will.i.am’s “It’s a New Day” and MIA’s “Paper Planes.”

ONE was cofounded by Bono and has worked to bring awareness to world poverty for almost a decade. A statement on their website says it all: “We’re not asking for your money. We’re asking for your voice.” With the compilation, Bono now has the voice of at least 50 of the most powerful names in music.

Celebrities targeted by the Kony 2012 campaign >>

The entire compilation is now streaming on their website, and each song includes a video by the artist.