A Canadian model claims Kanye West cheated on his baby mama Kim Kardashian with her. Could it be true? 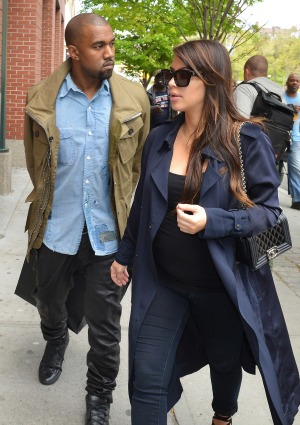 Kim Kardashian and Kanye West haven’t appeared to be spending a whole lot of time together during the reality star’s pregnancy, and now we might know why: Kanye’s alleged mistress is speaking out!

Canadian model Leyla Ghobadi, 24, claims she and Kanye started hooking up in July 2012 and kept up even after Kanye knew he was going to be a daddy, with the hip-hop star dismissing his relationship with Kim as only “for publicity and nothing serious.”

“This is going to destroy the Kardashian family,” Ghobadi told Star magazine. “It’s bad. It’s really bad. It’s just embarrassing. But if I were Kim and about to have a baby, I would want to know.”

The busty brunette model claims she met Kanye last summer when he picked her out of the crowd at one of his concerts and had security invite her backstage. While she declined his advances that night, he asked her to return the next — and that’s when the romance heated up.

“We began to make out for a while,” Ghobadi explained, “and next thing I knew, we were both naked and having sex.”

They hooked up again in October when Kim was pregnant but had not yet made the news public. When Kanye tried to get together with her again earlier this month, she declined because of the baby.

“I would never do that to someone,” she said.

Kim’s people are denying the claims and Kanye hasn’t commented yet, but even without this latest bombshell there seems to be trouble in paradise. Kanye held his birthday party in New York, and due to the late stage of her pregnancy, Kim was unable to fly out to join in the festivities — although she gave him a personal gift — and sees his disinterest in having his party in Los Angeles as an extension of his disinterest in her.

Keep up with the Kardashians and all your fave celebs — subscribe to the SheKnows Entertainment newsletter! >>

“Kim is so close to giving birth and she’s big and uncomfortable and knowing Kanye partied with all of their friends really made her mad,” a source told Radar Online.

“She isn’t traveling this late in her pregnancy but everyone else there could have easily come to Los Angeles, they all can hop on a private plane any time they want!”

“Kim totally respects Kanye and the work he has to do, but as her due date grows closer she is getting mad about how little time they’re spending together and wishes that he would try and accommodate her more.”

Kim’s baby girl is thought to be due in the next few weeks.

UPDATE: Kanye West has issued a statement denying the model’s claims. His rep told TMZ, “This most recent attack on Kanye West and his family is totally without merit. It’s a blatant attempt by a misguided individual who is clearly seeking publicity, and another in a series of malicious stories drummed up by non-credible ‘news’ sources.”

“This is a sad attempt to hurt two people trying to live their lives.”