The liars run into more trouble as they delve deeper into Mona’s secret lair, discover the newest Rosewood victim and play right into A’s hand. 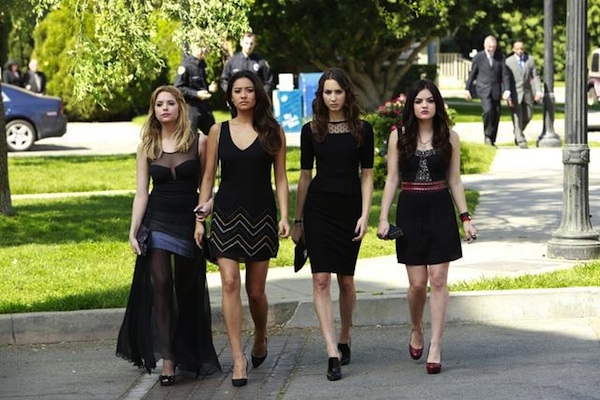 First off, we’ve all been on the edge of our seats for wondering what the heck was in the trunk of Wilden’s car! Turns out it is a dead pig. While it was certainly squirm-worthy, it was nothing compared to what the liars were about to discover.

Mona (Janel Parrish) and the girls stayed up all night while Mona revealed all her dark secrets. She was responsible for much of their torment, but not all of it. She didn’t push Ian from the bell tower; she doesn’t know who Red Coat is, and Shana and Jenna (Tammin Sursok) are in something and they’re both terrified of Melissa.

In the morning, the girls demand that Mona hand over all the dirt she has on them. But on the way to her lair, they discover the dead pig was intended as a puny warning. They pass a street barricaded by police and see Wilden’s dead body lying in the middle of the street! They liars will definitely get blamed for this one.

Stay up to date on PLL news! Subscribe to the SheKnows newsletter! >>

There were several more bombshells that dropped this episode. Detective Wilden and Melissa both played the role of the Queen of Hearts at the Masquerade Ball, at least according to Mona. Mona’s video footage was about to prove that; however, a hacker started deleting Mona’s files right as “Melissa” was about to reveal herself. Who knows the real truth?

Spencer (Troian Bellisario) and Mona both received a message from ‘A’ that sent them searching through Wilden’s casket where they discovered Hanna’s (Ashley Benson) mom’s cellphone. Does this mean Hanna’s mom is Mona’s next target?

Stay up to date on PLL news! Subscribe to the SheKnows newsletter! >>

Ali’s mom is back in town and has a creepy calmness about her. She also has a creepy way of staring into Spencer’s bedroom window without acknowledging she’s been caught peeking. Also, the way she told Hanna Ali would be proud of her for keeping the weight off seemed more like a comment from ‘A’ than from a friend’s mother.

A sexy surprise guest, Detective Holbrook, introduced himself to the girls and could prove to be an ally or an enemy depending on how ‘A’ plays it. All the girls, including Mona, received the threatening message outside Wilden’s funeral (very reminiscent of the pilot episode): “The truth with set you free, bitches. I’m going to bury you with it.” Attached was video footage of the liars messing around with Wilden’s car.

Looks like things are about to get much worse for the Rosewood foursome. Or is it a five-some these days?