We all have an outfit that we know drives our guys crazy. Actress Salma Hayek is no exception: She reveals what husband François-Henri Pinault loves to see her wear. Trés sexy! 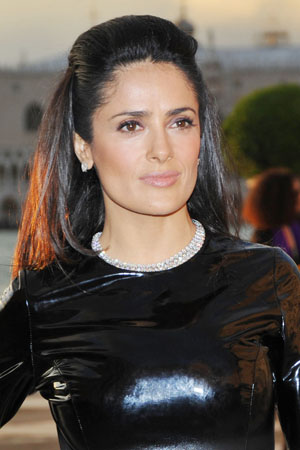 “I actually wear a lot of leather on the red carpet,” the actress tells InStyle in a new cover interview. “My husband loves when I wear it.”

We all like to look sexy — whether it’s just for us or to drive our guys wild — but how would you take it if your BF or husband tried to influence your wardrobe? Kim Kardashian did: She agreed to throw out all of her clothes last year on an episode of Keeping Up With the Kardashians. The trade-off? Kanye West bought her a closet full of new clothes.

“Look how dope this s**t is,” West told his girlfriend as she was “freaking out” over the monochromatic designer fashions. “[You’re] getting on best-dressed lists now. You’re stepping into this territory.”

What West didn’t expect, though, was the backlash he received for strong-arming his girlfriend’s fashion choices.

“That was from a place of love,” he told The New York Times of convincing Kardashian to change her clothes.

It also influenced his decision to stop his guest appearances on Keeping Up With the Kardashians.

Sometimes what we perceive as “help” isn’t helpful at all, Kanye. Sure, it’s nice to know what your guy thinks looks sexy on you — like Hayek, Pinault and leather — but completely changing your style? That’s where we draw the line.

Do you let your man influence your wardrobe, or is it not his choice? Sound off below!