Lenny Kravitz is a man of many talents. His latest project has him heading to television for The Queen Latifah Show. It has nothing to do with music, but everything to do with decorating. 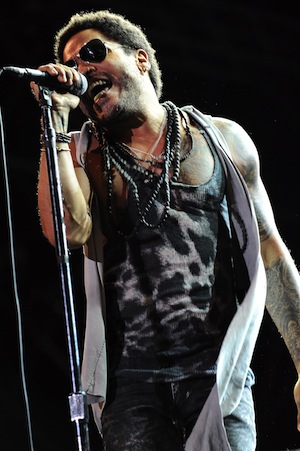 Lenny Kravitz has always had a signature style. He stands out in a crowd. So we’re not surprised he has his very own design firm. It’s called Kravitz Design Inc. and it’s taken on a huge celebrity client.

According to Entertainment Weekly, the rocker’s joined forces with rapper-turned-actress and now talk show host, Queen Latifah. It’s the first television venture his company’s tackled, and he’s thrilled about it.

“The set reflects Latifah’s personality and spirit and will be an inviting, comfortable space for her guests, studio audience and viewers,” said Kravitz. “I never thought of designing for television, but I suppose growing up in a TV studio watching my mother has come full circle.”

Kravitz’s mom was Roxie Roker, an actress best known for her role as Helen Willis on the sitcom The Jeffersons. She broke ground as one-half of the first interracial couple prominently featured on primetime TV.

Latifah is delighted by the new collaboration. “Lenny is not only an incredible musician but an incredible designer, and I almost can’t believe he is designing the set for my show,” she said in a statement. “I can’t wait for people to see it.”

We can’t wait to see it either. The Queen Latifah Show is scheduled to debut this fall Sept. 16 on CBS. Kravitz’s design team has plenty of time to get the set in working order. According to executive producer Jada Pinkett Smith, they’ve already made vast improvements. “Their creation blew us away!”