We’re chatting with one of our favorite Merlotte’s waitresses, True Blood‘s Lauren Bowles, about what we can expect from Season 6. 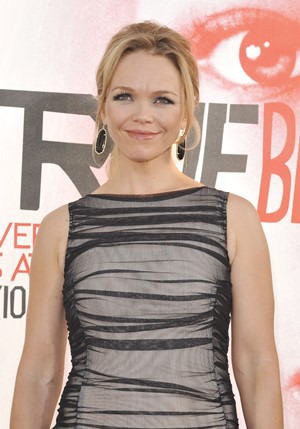 True Blood‘s Holly Cleary was left with some major relationship drama on her hands at the end of Season 6. We’re getting the scoop on how she’ll handle it as well as a bunch of other juicy TB details from actress Lauren Bowles.

SheKnows: Holly’s boyfriend, Sheriff Andy, finds himself as a parent to four little fairy babies at the end of last season. Will Holly stick by his side and help him raise them?

Lauren Bowles: Well, I can give nothing away, but I will say [at] the start of the season he definitely finds himself in a somewhat compromising position with her. She will not be very happy with him in the beginning, but things move quickly on the show, so anything is possible.

SK: How does Holly change this season?

LB: I would say this season is really the season of survival. You can make that joke with every season, but quite literally everyone is running for their lives. You really see a lot of growth in her personal relationships this year. You really have to band with everyone in your camp and that goes for Holly.

SK: Are we going to see the Wiccans play an active role in this season?

LB: It’s a big part of who Holly is, but it’s a lot more focused on her personal life this year.

SK: How will the dynamic between Sookie, Eric and Bill change now that Bill has become Billeth?

LB: I will say the triangle is always continued, and I feel confident that fans will not be disappointed.

SK: As the show’s gone on, the characters have been venturing farther out of Bon Temps. Are we going to see the show focus back in on the town?

LB: A lot happens this season, but there’s going to be a lot of focus on what’s going on in the town for sure.

SK: Every season it seems we’re introduced to a new mythological species. Are we going to see a new one this time?

LB: Yes, but not in the way that it’s been in the past where it’s a thing you’ve never heard of before. There might be some new things that haven’t been seen before in a different way than Season 5.

SK: So what’s the vibe like with everyone on set?

LB:  I’m convinced I work on the greatest show on television! Really, there’s no hierarchy that you hear about on a lot of TV shows. It’s very egalitarian. Everyone is just really professional. It’s just a dream. We have so much fun. I just kind of feel like, “Oh, pinch me.”

SK: I understand you’re a vegan. Does all the gore on the show ever gross you out?

LB: Well if it were real blood and guts it might, but when I see it’s really just corn syrup and food dye I can deal with it pretty well.

Don’t miss all the drama on the Season 6 premiere of True Blood, this Sunday on HBO.

Sookie gets another boy toy on True Blood