Tia Mowry is the latest star to step up, strip down and pose for PETA — though she hasn’t exactly gone nude. Check out her crunchy, vegan-approved look here! 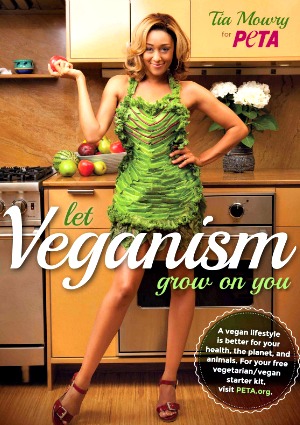 Tia Mowry has joined forces with People for the Ethical Treatment of Animals to proclaim her vegan status loudly and clearly — no matter what response she might get on social media sites.

“I became a vegan and I was getting bullied a lot on Twitter,” the 34-year-old told PETA. “There’s a stigma about being vegan, some people say it doesn’t taste great… Don’t knock it till you try it!”

Sharing a recipe for millet croquettes on her and sister Tamera Mowry’s fan site, the mother of Cree (who will celebrate his third birthday on June 28) with husband Cory Hardrict blogged, “Now that Cory and I have gone vegan, we’ve been exploring lots of lesser-known healthy foods (just take a look inside my fridge — it’s kind of crazy in there!). One of these foods is millet.”

Insisting the dish turned out “delicious,” Tia Mowry added, “If you associate this grain with birds, you’re correct — it’s commonly used as birdseed in North America. But I swear I’m not crazy — countries like Russia, Germany, India and China have incorporated millet into their diet for years.”

Take a behind-the-scenes look at the PETA photo shoot here:

What do you think of Tia Mowry’s entirely edible look?