Alexander Skarsgard and Ellen Page might be close, but they’re not that close. 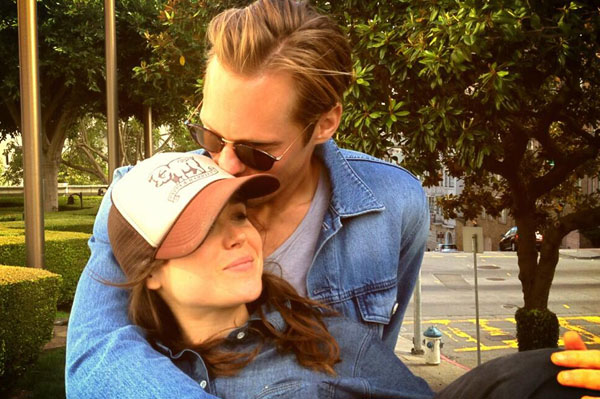 Simmer down, True Blood fans: Your favorite Nordic vampire is still on the market… or at least the guy who plays him isn’t dating anyone named Ellen Page.

Fans of Alexander Skarsgard flipped when The East director Zal Batmanglij tweeted a photo of the film’s star snuggling with costar Page.

“When we’d lie in the grass listening to Toby practice Rostam’s piano piece. #TheEast,” he wrote. Page retweeted the photo, adding that the shot showed off their “Canadian Tuxedo Party.”

It looks like a pretty intimate embrace, but a source told People that it’s just an embrace between good friends. It’s not the first time they’ve been spotted together, either: They took in a Los Angeles Kings game together last year. The tall Swede and the tiny Canadian were also spotted together — on friendly terms — at LAX.

There’s always the constant debate on whether or not guys and girls can just be friends, but we say it’s definitely possible.

And yes, that goes for celebrity platonic pals. Take Katy Perry and Robert Pattinson, for instance: The pair crashed a California wedding together after he broke up with longtime girlfriend Kristen Stewart.

However, they were just hanging out as friends.

“He and Kristen were arguing and Rob found comfort in Katy,” a source told Now magazine. “She’s fun to be with, not moody like Kristen.”

Will it translate into romance? Maybe, but being friends is cool, too.