Tom Riley lets us in on why he’ll never invent the helicopter and the artistic license that has allowed Da Vinci’s Demons to invent a character grounded in reality. 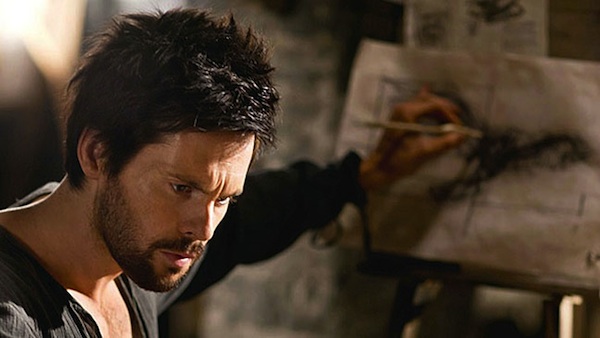 Aside from being well-spoken and good-looking, Tom Riley takes center stage as Leonardo da Vinci in Da Vinci’s Demons with a character that we’re a little afraid of but can’t help love. Riley spoke with SheKnows on his creative process and how the da Vinci of Da Vinci’s Demons was born.

SheKnows: Da Vinci isn’t afraid to let his colors show. Are you similar to him?

Tom Riley: I wish I had even half the ability to stay as absolutely true to himself and his beliefs as he does or be as utterly unashamed and unafraid of how he comes across to others. It speaks of a man with a singular vision. I spend too much time apologizing and second-guessing myself. It probably means I’m easier to be around, but it also means I’ll never invent the helicopter…

SK: Da Vinci’s sexuality has become quite the talking point during the season. Were you surprised? And as an actor, how do you take on that challenge?

TR: I wasn’t surprised, as I knew it was a contentious issue. Although I was perhaps surprised at just how vehemently some people felt about it. If we had picked a historical figure who had been a self-proclaimed and celebrated homosexual, such as Oscar Wilde, and then proceeded to delete that from our portrayal of him, then that vitriol would have been utterly deserved. As it was, we chose a figure whose sexuality has been clouded in centuries of speculation and who never professed to a leaning in one direction or another, although others have since done it for him, from both sides of the argument.

The fact he himself obviously perceived it as something he didn’t want to commit to in his journals was fascinating and opened up a whole story stand where we could try and examine where a man who actively flouted self-definition may have been coming from. Hopefully that exploration will continue in later seasons. I’m not sure the marketing helped us out early on, when Leonardo was presented in early trailers as a ‘womanizer.’ That’s never how I saw him, and I always believed that his pursuit of knowledge and enlightenment always trumped his pursuit of flesh, be it male or female.

SK: How similar do you think your portrayal of da Vinci is to the real man?

TR: We have taken a lot of artistic license with his look, making him intentionally anachronistic (with his hair and clothes and modern speech patterns) so as to present a very clear symbol at the heart of the show, which encapsulates what we’re trying to achieve with it. That said, I think he was most certainly arrogant — his letters of self-recommendation probe as much. The singularity of purpose seen in his notebooks implies a level of autism that may have presented itself in tics and social awkwardness. The commissions he received obviously came as a result of his ability to charm. Various biographies claimed he was strong, a great swordsman and horseman. I did a great deal of research on all of these things and then tried to feed them all in as the foundations for our brand new take on him.

SK: Behind the genius, the root of da Vinci seems to be his family and his quest for the Book of Leaves. Will he find these answers?

TR: Let’s hope so. But I don’t know when. Only David Goyer and his team does. The question is really whether those answers will give him the peace he’s hunting for.

Recap of the Season 1 finale >>

SK: What da Vinci invention or painting would you like to appear in the series that we haven’t seen yet?

TR: Some of the ones in Season 2 are just brilliant. Notice I didn’t mention whether I’m referring to inventions or paintings…

SK: What can you tell us about Season 2?