The bassist for Mumford & Sons has a dangerous blood clot on his brain, and now the band has postponed multiple shows. 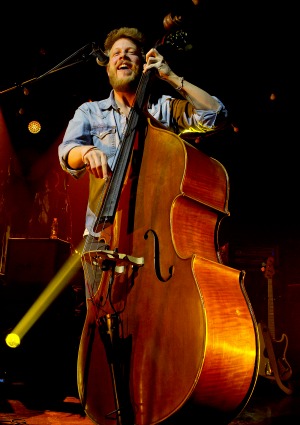 Mumford & Sons bassist Ted Dwane has been diagnosed with a dangerous blood clot on his brain and must undergo emergency surgery.

The band announced the news on their website, saying, “Our friend and bandmate Ted has been feeling unwell for a few days, and yesterday he was taken to a hospital to receive emergency treatment. The scans revealed a blood clot on the surface of his brain that requires an operation. Ted is receiving excellent care and we are being assured that he will recover quickly from surgery.”

Dwane is expected to be just fine, but the band must postpone several shows while he recovers.

“Sadly we have to postpone three upcoming headline shows planned for this week in Dallas on Tuesday 6/11, Woodlands on Wednesday 6/12, and New Orleans on Thursday 6/13,” the band’s statement explained. “All dates will be rescheduled and will be announced as soon as we can; all tickets for this week’s events will be honored at their rescheduled dates. We have no plans to cancel or postpone any other appearances along this current tour.”

Stay up-to-date on all the hottest celebrity news — subscribe to the SheKnows Entertainment newsletter! >>

The British folk-rock band won the Album of the Year award at the 2013 Grammys for their sophomore release Babel. Lead singer Marcus Mumford married The Great Gatsby actress Carey Mulligan in April 2012.