In the Switched at Birth Season 2 summer premiere, called “Mother and Child Divided,” tensions run high as Daphne and Bay continue their spat while Regina struggles after her return from rehab and an old friend returns. 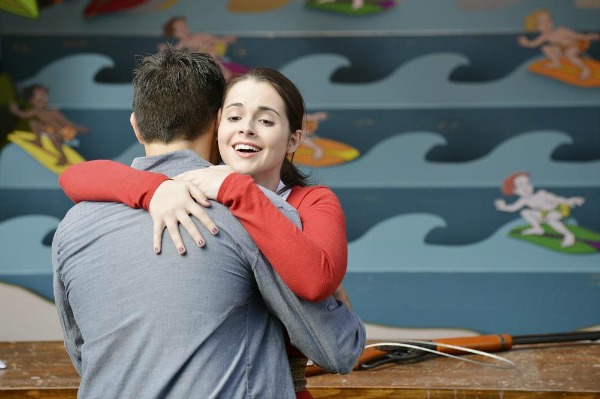 I like that we’re actually seeing summer during the summer on Switched at Birth this year. It was fun to see everyone playing in the sun, swimming and doing what they normally do when they’re not in school. That being said, the sunny weather didn’t exactly make for sunny relationships between anyone. As usual, nothing is really going smoothly for either the Kennishes or the Vasquezes in this episode.

First off, Bay is still mad at Daphne for not supporting her decision to go to Carlton — and for kissing her boyfriend (even if it was just a rehearsal kiss). Bay also doesn’t seem to appreciate the fact that Daphne has basically moved in while Regina was away at rehab. Things then go from bad to worse when the two of them have to work together, and I was honestly relieved when Bay found herself another job working at the carnival.

Speaking of the carnival, it was great seeing Ty and Bay together again, but there is no doubt that something is up with him. I liked that he defended her when his friends played that nasty trick on her, but the way he did it was a little frightening. Something tells me there’s more behind his actions than just not liking the joke.

Regina’s homecoming wasn’t very happy, thanks to discovering that her daughter had been having so much fun with her new family. It was upsetting to see her struggle, but I did kind of love the fact that that precipitated what looks a stronger bond between her and Bay. It was very true what Bay said about Daphne and Kathryn bonding and I’m looking forward to seeing Regina and Bay get in on some of that action, too.

I have to admit that I was a little surprised to see Toby and Nikki still engaged. I would’ve thought for sure one of them would have backed out. Though with all the tension between Nikki and Kathryn about the wedding, who knows what’s going to happen between those two as the season continues.

It was interesting to find out that Travis is still a virgin, but I love that Emmett has volunteered to help him out. That should provide some fun moments this summer.

I was sorry we didn’t get to see Angelo at all in this episode, but hopefully he’ll be back soon. Other than his absence, I really enjoyed this premiere and I’m looking forward to the rest of this season. 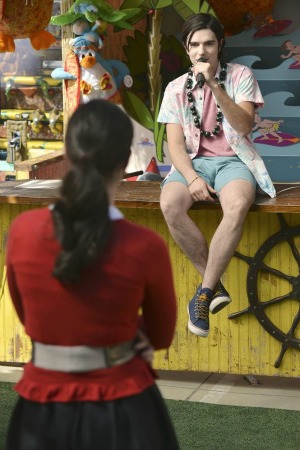 “Untrue! It was three and a half.”

Bay and Regina providing the dialogue for the poolside conversation about the upcoming wedding.

Toby telling his mom to get on board with the wedding or they’d be fighting all summer.

The fact that Travis suggested a party as soon as Melody left the room.

The matching looks of shock on Daphne and Kathryn’s faces when they saw Regina. Awkward.

Toby pointing out to the girls that he was neither deaf nor single, but Travis was.

Regina returning the bottle of vodka to Kathryn.

The entire conversation between Kathryn and Regina about what constituted “suffering.”

Bay finding out that she’d broken down in Maui. Now, that’s what I call a detour.

Ty showing up out of the blue. Whoa!

“My room could really use a gigantic monkey hugging a banana.” — But really, whose room couldn’t use one of those?

Regina standing up for Bay’s choice to work at a carnival.

“Some moments are bigger than the math of how much a dress costs.”
“It depends on who’s doing the math.”

Travis trying to claim that the picture of Emmett and his mom was of an ex-girlfriend.

Daphne telling Regina how much easier her life was without her there. Ouch.

Melody walking in on the guys’ little party. Oops.

The girls taking off when they realized that the “ex” had shown up. Haha!

“You know what? I’m sick of you yelling at me for things that I have zero control over.”

Regina agreeing to let Bay stay with her.

What did you think of the premiere? What were your favorite, or least favorite, parts of the episode?