Whose relationships are going to be challenged this season? Which characters will end up leaning on one other? Find out as we get spoilers from the Switched at Birth cast. 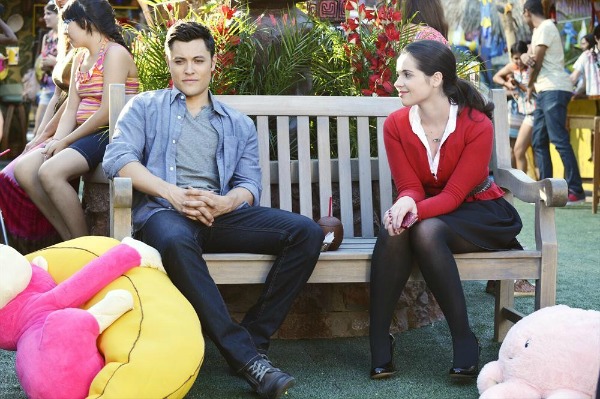 Switched at Birth Season 2 has gotten off to a very dramatic start that gave us the return of a beloved character, and brought one mother and daughter closer together while dragging another mother and daughter further apart. What else is in store for fans this season? Check out what cast members Katie Leclerc (Daphne), Vanessa Marano (Bay), Lucas Grabeel (Toby), Ryan Lane (Travis), Cassi Thomson (Nikki), and Blair Redford (Ty) had to say when we got the chance to chat with them.

Bay and Daphne won’t stay mad at each other forever

In the summer premiere, we saw that Bay and Daphne were still really angry at each other, but don’t expect the two of them to fight forever. Asked how their relationship will go this season, Marano said, “I feel like Bay and Daphne are at a point where they can’t stay mad at each other for too long because they’ve just been through too much.”

Leclerc added, “They start out a little at odds at each other, but we kind of go back and forth.”

Daphne will have some romance in Season 2

Daphne hasn’t had the best of luck with boys, but she did seem to meet someone in the premiere. Will she have any romance this season? “Daphne does meet a boy, but she is coming from her Carlton experience, feeling empowered and very much like she can make a difference. I think that’s a wonderful story line for teenage girls to be seeing and to feel like, ‘It doesn’t matter how old you are, you can effect a change in this world. It starts with you. You can be as powerful as you want to be and it can snowball into something you had no idea it could ever be.’ That being said, when she does meet this boy, of course she is attracted to him. They’re going to go slow and take their time,” Leclerc teased.

Ty will begin to lean on Bay

Ty’s return was definitely a surprise to Bay, and Marano promises the two will grow closer as the season progresses. She said a lot has changed between Ty and Bay, because he’s been to war and that they are at a point where Bay’s not as lost and Ty is, so he gets to lean on her, “which is nice for Bay as she’s never been the one to get leaned on before,” Marano said.

Bay and Ty had a mostly happy reunion in the premiere, though his anger did hint that something darker might be on the horizon for them. “It’s going to be a little bumpy at first with the two of them running into each other and figuring out where they fall into place because, at least on Ty’s end, he’s changed in a big way,” Redford teased.

“Ty’s time away showed him a world very different from life back at home. He’s returning being a little bit more worldly, [after] seeing the harshness of the Middle East and war, and dealing with the death of his friends and treatment of women over there. So he’s had a lot that he’s gone through in the amount of time that he’s been away and I think he’s just trying to process that and let that settle now that he’s back in the norm,” Redford said.

Season 2 will see Regina and Bay forge a new relationship

Regina had a tough time in the premiere and things are going to continue to be difficult for her as the season goes on, but Marano says Bay won’t be too easy on her. “Bay’s not going to take it anymore. This season is really about her forging that relationship [with Regina] and Regina being like ‘OK, I’ve been distant for too long.'”

Angelo and Bay’s relationship will be tested this season

Angelo’s search for his newborn daughter won’t be easy for him or for Bay. “That child is a representation of what Bay is — somebody who wasn’t with her biological family, but with [people] she already loves. It’s hard for Bay because she has to acknowledge Angelo as her father, but in doing that does she unacknowledged her relationship with the Kennishes? That’s very testing; the Angelo and Bay relationship.”

There is a “What if?” episode coming

Asked about what she was most excited for fans to see in the rest of the season, Marano said, “We have a “What if?” episode coming. I’m very excited about that because it was super fun to play and I think it will be very satisfying for fans of the show. [The fans will] kind of get to see things happening in a different way and whether or not that would’ve been a good thing for the characters.”

The kids of Carlton are coming back

“We do have an episode coming up where we get to see all of the kids from Carlton come returning. So that’s kind of fun, seeing them outside of school,” Marano said.

There will be trouble in paradise for Toby and Nikki

Toby and Nikki’s engagement is still on, but it’s posing a lot of challenges for the couple. “With any engagement comes surprises and issues. I think it makes Toby and Nikki wonder if it’s too much. There is definitely some trouble in paradise,” Thomson said.

Toby to put music on hold to take on adult responsibilities

Asked what we can expect to see from Toby this season, Grabeel said, “He’s going to get a new job and grow up in that regard. He’s going to put his music on hold for a minute, which at first he kind of doesn’t notice. Balancing wedding planning, holding down a regular relationship in general, a full-time job, and this constant changing family dynamic is a lot. So he’s a little more stressed out. He’s not having the normal kid summer relaxation time.”

Grabeel added that things will “blow up in his face when he takes on too much at one time.”

Daphne and Nikki will be at odds this season

We saw Nikki get a job at the senator’s office in the premiere, which is going to cause some tension between her and Daphne. Nikki showed in the premiere that she’s got a strong point of view and it won’t be any different when she’s at work and dealing with the issues that come up in a public office. “Nikki really puts her foot down on some of the issues and kind of gets at odds with Daphne because they have opposite views. You’ll get to see a different side of Nikki.”

We’re going to see a whole new Travis this season

PLL‘s Janel Parrish: Red coat girl and A are different people!
Pretty Little Liars poll: Which outfit of Aria’s is crazier?
Jes Macallan spills: What’s ahead for the Mistresses