Weather anchor Sam Champion is venturing to cable next weekend, with a hosting gig on the Daytime Entertainment Emmy Awards. 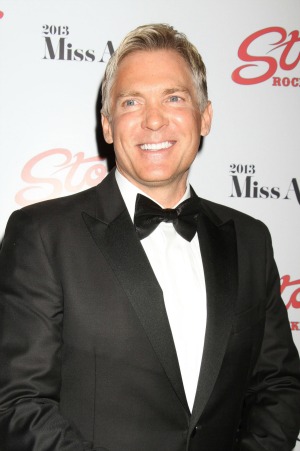 Good Morning America’s weather anchor Sam Champion has been announced as the host of The Daytime Entertainment Emmy Awards, according to the Associated Press. The weatherman will be hosting alongside HLN’s A.J. Hammer and Robin Meade.

Champion is coming to the show as a newlywed. He was married in front of family friends, and many of his GMA co-workers, last December, to his longtime boyfriend Rubem Robierb.

Champion appeared on Wendy Williams’ show Monday morning to talk about his new marriage, and what he sees in their future.

Champion said they have talked about having kids, but he is not sold on the idea quite yet.

“If it’s something that [Robierb] wants, and I think it is something he wants at some point, then we’ll do it,” Champion said. “I don’t know what a great dad I am, because I’m really scatterbrained. But he’ll be amazing at whatever he wants.”

Champion also talked about his biggest competitor, Al Roker. But he has nothing but respect for the Today Show weatherman.

“This guy is the world’s best. When I came to New York he was one of the first people that I met,” Champion told Williams. “I love him, his children, his wife. They’re the world’s best. We can get saucy when we are sitting around talking. Al and I can have an opinion, but he’s amazing.”

HLN Morning Express host Meade will also be singing the best song nominees, according to AP. Hammer, who hosts HLN’s Showbiz Tonight, will be emceeing the red carpet special for the show.

Presenters for the Daytime Emmy Awards will include Kathy Griffin, Rachael Ray, Dr. Drew Pinsky, Erika Slezak, and the hosts of The Talk. Steve Harvey, Betty White, Wayne Brady, and Alex Trebek, and many others will also be appearing.

The Young & The Restless: Phyllis’ most devious moments >>

The Daytime Emmy Awards will air June 16 on HLN.