No one can say soap operas aren’t creative! In honor of the five soaps up for Daytime Emmy awards this year, we revisit the plotlines from each that stretched the limits of our imagination to the max. 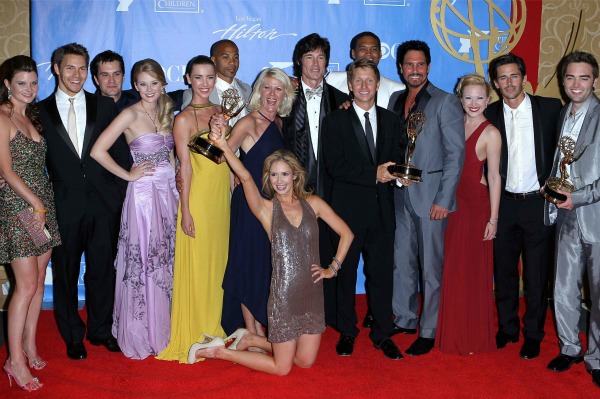 The Young and the Restless‘ life and death of David Kimble

Originally Jill’s assistant, David Kimble’s first acts in Genoa City include threatening to cut someone’s face, eloping with Nina, starting affair with a mail room attendant and plotting to kill Nina and her son. Did we mention he murdered his ex-wife and his ex-wife’s BFF? He also sets a body from the morgue on fire in an attempt to fake his own death and hires a plastic surgeon to alter his appearance… but the surgeon instead carves the word “KILLER” on his forehead. He covers the brand mark with makeup, adopts a Southern accent and passes himself off as someone else convincingly enough to marry Nina’s mother, Flo. At a masquerade ball, he corners and shoots Nina, Danny and Cricket — not realizing the bullets in his gun have been replaced with wax ones. Thinking he has killed all three of them, he flees from the police… only to duck into a garbage chute and be squished to death by a trash compactor. Wowza.

General Hospital‘s Luke and Laura save the world

Is it that crazy that a Greek billionaire comes to Port Charles in search of a diamond called the Ice Princess? Nah. Is it crazy that Mikkos, the billionaire, wants to take over the world and creates a machine to force a blizzard on the city? Uh, yeah. Even crazier? His nefarious plans include blanketing the entire world in ice if he doesn’t get what he wants! Of course, he doesn’t anticipate major interference in the form of Luke and Laura — who, amazingly, are able to shut down the machine and kill the evil Mikkos. The plot doesn’t stop there, though… Mikkos’ equally insane widow — played by none other than Elizabeth Taylor — crashes the heroes’ wedding and hexes them for killing her precious Mikkos.

Days of Our Lives‘ Salem Stalker

Nobody likes it when their favorite characters are killed off, so — naturally — fans flew into a frenzy when many of the main players in Salem started dying off at the hands of an unknown maniac. After a string of majorly shocking murders — Abe Carver, Jack Deveraux, Maggie Horton, the Bradys and more — viewers were served another shock upon learning the crimes were committed by Dr. Marlena Evans-Black. The story took another twist when all of the victims turned up alive. Yes, alive and in the alternative community of Melaswen (did ya guess that is New Salem spelled backwards?) The good doctor, as it turns out, wasn’t really to blame… she was just brainwashed by dastardly Stefano’s nephew, of course! Apparently they wanted to break up all of the couples in Salem, and the traditional routes of backstabbing, adultery and deception just weren’t original enough.

The Bold and the Beautiful‘s Ridge and Bridget situation

The Bold and the Beautiful were introduced to Bridget Forrester as the love child of Ridge Forrester and Brooke Logan, so it’s not farfetched that fans — and Ridge — were shocked to learn Bridget was actually his sister. Scratching your head? Well, apparently Sheila (Carter) had switched the paternity tests to hide the fact that Ridge’s father, Eric Forrester, actually sired little Bridget. Fast forward several years later and Ridge gets the wind knocked out of him once more when Stephanie divulges Eric isn’t even Ridge’s biological father. Here’s where things get a bit, well, icky — Ridge and Bridget get the hots for each other. Sure, by all accounts, they are not, in fact, biologically related. But — and this is a big one — Ridge, and B & B fans, had spent virtually Bridget’s entire life believe she was either his daughter or sister. Either way, totally a close relative. Luckily, their kissing scene had fans seeing red, leading the writers to scrap the pseudo-incestuous storyline.

One Life to Live’s Jess, I mean Tess… or Bess?

The trouble for Jessica Buchanan begins when her mama’s alter ego takes her into a bar as a child, inadvertently subjecting the young girl to molestation. To deal with the traumatic event, Jessica forms a split personality of her own, Tess. When Tess pops back up later in Jessica’s life, she does so in the form of a hard-partying socialite who likes to sleep around. Of course, just like her mother, she sprouts a more responsible alter ego as well in the form of smarty-pants Bess. But, as wackadoo as two alter egos plotline was, it just wasn’t wacky enough for One Life to Live’s writers. For a sliver of time, Bess and Tess had to make room in Jessica’s bustling psyche for Wes — a hornball male alternate personality!

More on the Daytime Emmys