Ian Ziering has hit Sin City by joining the Chippendales revue show for the month of June. Fans can see the former Beverly Hills, 90210 star buff and shirtless. 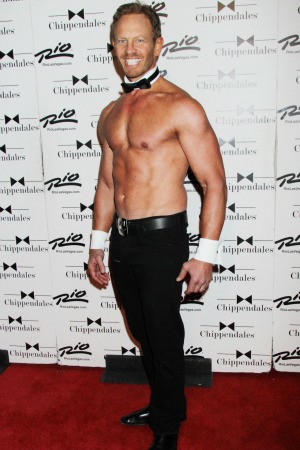 Ian Ziering might not be starring in the sequel to Magic Mike, but he’s living out the movie by starring in the Chippendales show in Las Vegas. The former Beverly Hills, 90210 star is the guest headliner with the male revue show through June 30.

Ziering made his debut on June 6 and is definitely taking the role seriously. The actor told Good Morning America about his three-month diet preparations for the gig.

He shared, “I had a vision board to see the weight I want to be. I had the playing cards of all the Chippendales guys up there so it was very motivating.”

The diet doesn’t sound like much fun, even though he lost 25 pounds. He ate only protein for the first five days and then eventually added vegetables and carbohydrates. However, his marriage did see a few benefits from the dieting.

Ziering told the morning show, “As the weight came off, the flirty texts started to appear. A little more sugar, if you know what I mean.”

For fans of the 1990s teen show, there might be a bit of a 90210 reunion in the works. Ziering shared that Jennie Garth, Jason Priestley and Luke Perry have all expressed an interest in seeing his Vegas show.

9021-Oh no! Jennie Garth and Tiffani Thiessen are enemies >>

He said, “I’ve got to get a call to Shannen [Doherty] and Gabrielle [Carteris] and the other girls… maybe I can get them out here to have a party.”

Fans can catch Ziering in the Chippendales revue at the Rio All-Suites Hotel and Casino on Thursdays through Saturdays until June 30.