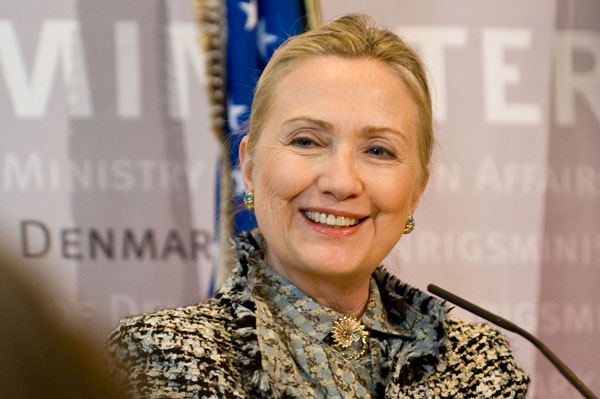 Move over, Liam Hemsworth: a new celebrity has signed on to Twitter— and this one might possibly become the next President of the United States!

Hillary Clinton sent out her inaugural tweet from her @HillaryClinton handle on Monday afternoon.

“Thanks for the inspiration @ASmith83 & @Sllambe – I’ll take it from here… #tweetsfromhillary,” she tweeted, referring to Adam Smith and Stacy Lambe, the co-creators of the popular (and now defunct) Texts From Hillary Tumblr.

It didn’t take long for her family to welcome her to the social media website. “Welcome Mom!” daughter Chelsea Clinton tweeted soon after her mom signed on.

Former President Bill Clinton also welcomed his wife to the website. “Does @Twitter have a family share plan? Great to be here with @HillaryClinton & @ChelseaClinton. Looking forward to #tweetsfromhillary,” he joked.

We can’t wait to see what sort of nuggets of wisdom the former Secretary of State will tweet out to her followers. Will it be about her run for president in 2016? Probably, judging from her Twitter bio.

What’s that TBD all about, Hillary? It could be about a presidential run, or maybe she finally decided to take Jason Segel up on his acting offer.

“I just feel like she would be good at comedy,” Segel joked to Us Weekly in 2012, adding that he’d love to cast the former FLOTUS in Forgetting Sarah Marshall 2. “I think you can feel it from a mile away.”

Clinton turned him down.

“I was delighted to read about your interest in sharing the big screen with me,” Clinton wrote to Segel. “As you can imagine, I am a little occupied at the moment, but perhaps someday I can help you forget Sarah Marshall… again. My only condition is that there be Muppets involved, and that is non-negotiable. In the meantime, you have my best wishes for continued success with your career.”

Maybe that “someday” is now, given that she’s done with the Secretary of State gig? We’d definitely plunk down the $15 to watch.