Savi struggles to tell her husband about her one-night stand, but she does tell her friends. One doesn’t take it so well. 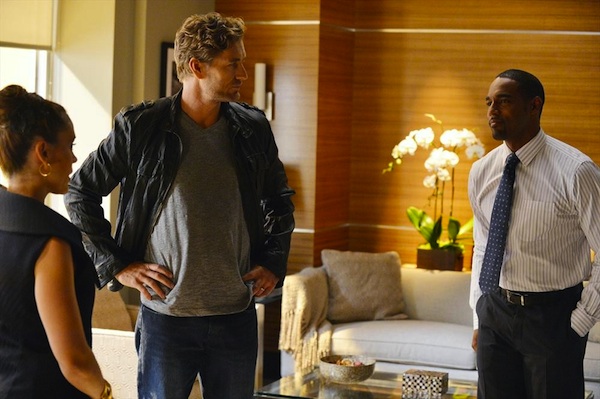 If Mistresses were a boy band, Savi (Alyssa Milano) would be the Justin Timberlake. The others are just sort of the backup dancers. With so many different story lines and scandals happening at once, we’re just hoping the show can keep it cohesive enough to hit the right moves.

Savi’s feeling guilty about her affair with Dominic. After talking with Karen, Savi decides to wait before telling Harry about the affair. Karen recommends Savi first figure out why she consented to the affair so she can make sure it isn’t going to happen again.

Savi talks to Dominic and tells him the one-night stand was a mistake. Dominic calls her out because she was the one who initiated the first kiss.

Savi meets with Tom’s wife regarding the investigation of his death. The life insurance company is trying to rule out that Tom did in fact die of natural causes.

Harry shows up at Savi’s office and apologizes for their fight. Turns out, Harry called the doctor again, and there’s still a pretty good chance they can have a child. Harry’s heart-felt apology only makes her feel more guilty about the affair.

Savi admits to Harry that she isn’t ready to have a baby. She and Harry are in a rut, and Harry is open to waiting to have kids. Harry asks her if that’s all she wants to tell him, and she says it is. They hook up. 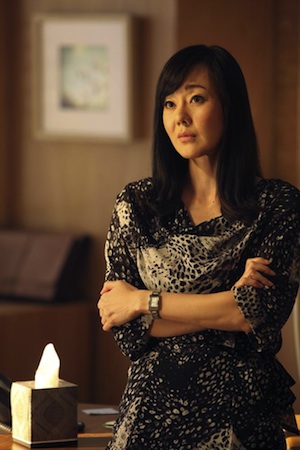 Tom’s son Sam continually calls Karen until, at the advice of a co-worker, she agrees to meet with him. The two have a nice talk, and Karen seems to feel better about the situation and his innocent crush.

That is, until an investigator named Anthony with the life insurance company arrives to talk to Karen about Tom. Anthony wants to know why Tom was seeing Karen. Karen explains the situation and tells him she doesn’t think Tom was suicidal. Anthony asks about Karen’s notes from her sessions with Tom. He assumes she can provide them if necessary. Either Karen doesn’t have notes or the notes prove she’s lying because Karen is really hesitant when Anthony mentions them.

Sam shows up at Karen’s office, and she yells at him to never contact her again.

Joss has moved into Savi’s guest house and taken to giving Harry, Savi’s husband, advice about reconciling with his wife. For someone so scared of intimacy and relationships, Joss is probably the best at giving advice about them.

Alex calls Joss and tells her she has to cancel their next house-hunting appointment. Joss convinces her to meet for lunch, which leads to Joss convincing Alex to look at one more house. Once they’re at the house, the girls amuse themselves with looking inside the owner’s drawers and find some pretty kinky things. One sticks out in particular. It’s a rope, and Alex knows how to use it. She demonstrates its purpose on Joss and tells her that when it’s done properly, it’s actually beautiful.

Later, Alex calls Joss to tell her she and her girlfriend are most likely going to buy the house.

April tells Savi and Karen about her husband Paul’s affair before he died. Savi suggests maybe the woman is making up a sob story to get part of April’s life insurance money. April admits that there’s some research that needs to be done, and Savi helps her investigate.

The facts line up against Paul. April discovers he bought a car she never knew about, and the woman worked at the same hotel Paul stayed at multiple times on business.

April tells Savi that she doesn’t understand how someone can cheat. Savi, unable to keep the emotion in, admits she cheated on Harry. April is disgusted.

April goes to the other woman’s place and, sure enough, the mistress wants money.