The Superman reboot is here just in time for summer, which got us thinking about the less in-your-face, less cape-wearing men of steel. Would people be as into Superman if he was chubby and wore ill-fitting clothing? What if he was hot, but couldn’t fly? With this in mind, here are a few unlikely men of steel. 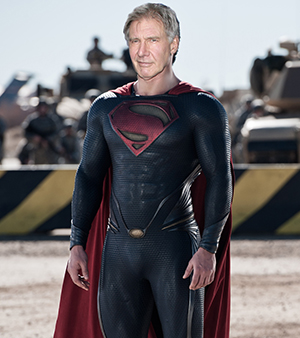 We’re used to Harrison Ford rescuing small children, women, dogs, the elderly — pretty much all walks of life — as his on-screen character Indiana Jones. But as it turns out, Harrison Ford has a stitch of superhero in him offscreen too. When a hiker became stranded by his Wyoming ranch, he found her and picked her up in his helicopter (sounds like a movie, right? How many stranded hiker stories end with, “And then Harrison Ford picked me up in his helicopter”?). On a separate occasion, Ford found a lost Boy Scout who had wandered from his camp in Yellowstone Park. So kids, if you’re going to get lost in Wyoming, try to do it by Harrison Ford’s ranch.

Up next: Will Ferrell >>