Justin Bieber is being sued by a photographer for allegedly masterminding an attack that involved a gun. Did the Biebs and his bodyguards go too far? 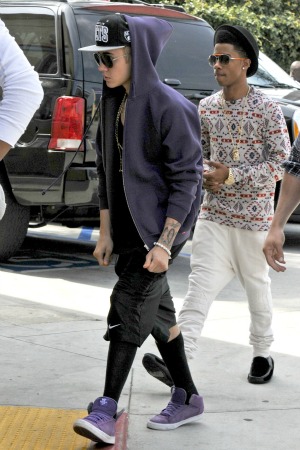 TMZ reports that photographer Jeffrey Binion filed a police report on June 5, claiming that Bieber’s bodyguards attacked him while he tried to take pictures of Bieber outside of Miami’s Hit Factory recording studio.

Are we all too harsh on the Biebs? In defense of Justin Bieber >>

According to Binion, the bodyguards were directed by Bieber to attack him and that they used a gun when they did it.

Binion has now filed suit against Bieber and his bodyguard Hugo Hesny. The suit claims that Bieber masterminded the attack and per Bieber’s orders Hesny threw Binion against a wall, grabbed him by the throat and “displayed a gun” (holstered under his shirt) while Hesny and the other bodyguards took the memory card from his camera.

Binion insists that he is a professional photographer and not a paparazzo and didn’t deserve that kind of treatment. He claims he has suffered bodily injury, pain and suffering, mental anguish and incurred medical expenses.

Binion’s lawyer, Russell S. Adler, told TMZ, “Justin Bieber is now an adult, and he should act like one. He needs to learn that he cannot use bodyguards as weapons to harm innocent people. Bieber’s violent behavior toward photographers must end, and he should take responsibility for his actions.”

Adler continued, saying, “No amount of fame or fortune justifies Bieber’s shameful and outrageous conduct. To send him that message and deter his misbehavior in the future, we will seek punitive damages against him as allowed by Florida law.”

Adler has previously handled cases against Rosie O’Donnell, Paulina Rubio and Jason Kidd. The attorney also claims that Hesny is not licensed to work as a bodyguard in the state of Florida, nor does he have a concealed weapons carrying permit there.

This is far from the first incident for Bieber and his bodyguards. They were recently involved in no less than four similar incidents in the past week. Three of the incidents were in Miami last week and one other happened on Saturday night in Hollywood.

After a week like this one, we’re betting that Bieber is hoping that his flight into space happens sooner rather than later.