The Ellen DeGeneres Show continues to dominate the Daytime Emmys for daytime talk. In honor of the nominee’s hilarity, we dug up five Ellen moments that’ll have you laughing so hard you’ll cry… or pee your pants. We hope the former, for your sake. 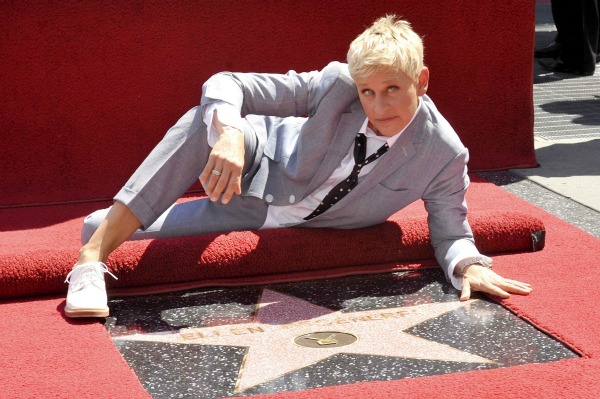 It pays to be nice to crazy pregnant people

This clip illustrates two very important points: first and foremost, Ellen is hilarious and, second, you should always be nice to pregnant women — no matter how cuckoo they seem. Even if they are knocking boxes over at IKEA and randomly shouting imaginary words like “spurfunkel” and “lindenbergel,” you can never be sure if it’s just hormones or, more importantly, Ellen sitting in a studio waiting to give you a big ol’ wad o’ cash simply for showing some compassion.

Andy gets a surprise vaccination

https://youtube.com/watch?v=jHTeRTtaKO8
Poor Andy! Ellen is always jumping out and scaring her skittish show producer, so — when Ellen airs a clip about the most easily scared man in Norway — Andy is convinced Ellen is going to pull some crazy stunt to make him jump out of his skin. He is so convinced that he basically twitches as a nurse preps him for a surprise flu shot, which he believes to be a gimmick that is going to explode or something. Just try not to laugh when the needle sinks into his arm and he realizes just how real it is!

In honor of reaching her 1500th show, Ellen decides to air a little montage of her favorite moments on the show — little “happy accidents” caught on camera. From zany Richard Simmons taking a spill backstage to Ashton Kutcher flashing Ellen’s mom (who doesn’t seem to mind all that much!), the clip will make your sides hurt from laughing so hard. And don’t even get me started on the bit about the as-seen-on-TV product!

https://youtube.com/watch?v=vTaExbFf3ec
During an episode Ellen describes as a “burrito filled with joy,” the veteran talk show host sends a huge shout-out to her wife Portia de Rossi — who just so happens to be celebrating her 40th birthday on set with Ellen. As such, Ellen reenacts Portia’s life, complete with an epically bad Australian accent, LOL-inducing wigs and even a hilarious cameo by Will & Grace‘s Sean Hayes. Disclaimer: In addition to making you laugh so hard you cry, this clip will probably make you, well, cry anyway. It’s a bit of a tearjerker!

https://youtube.com/watch?v=pwJMLoeDQiE%3Flist%3DPLD5E90CA1DB1BAD10
I cannot, I repeat, cannot keep my composure when someone else loses theirs. If someone is laughing and starts to dissolve into uncontrollable giggling, I follow suit until it escalates to the point that I’m reduced to doing some strange, breathless, bouncing up and down in my seat with tears streaming down my face dance — which is exactly what happened when I watched this clip in which both Ellen and show producer Andy just can’t seem to regain their cool.