Neil Patrick Harris shocked the audience by dropping the N-word during a musical number at the Tony Awards last night. If Mike Tyson is OK with it, should we be, too? 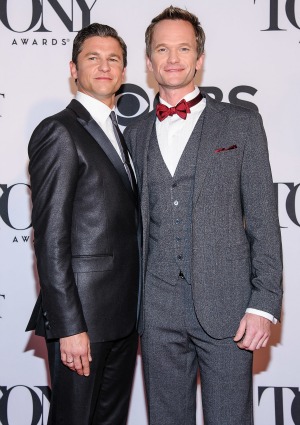 Normally mild-mannered star Neil Patrick Harris shocked the crowd at the Tony Awards last night when he dropped the N-word during his opening musical number!

The How I Met Your Mother actor was rapping alongside boxer Mike Tyson when he sang the politically incorrect lyric, raising more than a few eyebrows.

“In tandem like we planned ’em/ forgive me if it’s random but Mike Tyson had a one man show let’s give the man a hand/ And make things bigger, like bigger/ I’m here with Iron Mike Tyson, he’s a heavyweight yo/ We’re going bigger, is ‘Is I his n****r?'” Harris rapped during his fourth turn hosting the awards.

Tyson, who was soft-shoe dancing at the time, was unfazed by the lyric.

The openly gay 39-year-old advocate for the LGBT community performed the eight-minute opener alongside a bevy of Broadway performers.

That wasn’t the only shocking slip of the tongue during the awards show honoring Broadway. Harris also enjoyed a French kiss from Sandy, the lovable mutt from Annie.

“You do know I’m in a relationship, right?” Harris cracked.

The actor avoided discussing the controversy on Twitter this morning, writing only, “Such fun last night hosting the @TheTonyAwards. A BIG thanks to the 121 performers from every show that played along. You’re remarkable!”

UPDATE: Neil Patrick Harris has updated his Twitter account in response to media reports and denies he said the offending word at all.

“Really, Daily Mail?!? The N-word? That’s your story?!? I would NEVER be so disrespectful and frankly, neither should you,” he wrote.

“But truly, last night made me love theatre and revere the amazing and tireless performers working so hard each night. ‘Twas a great time.”

Tell us: How do you feel about Neil Patrick Harris saying the N-word at the Tony Awards?

Catch the best of all your favorite award shows — subscribe to the SheKnows Entertainment newsletter! >>