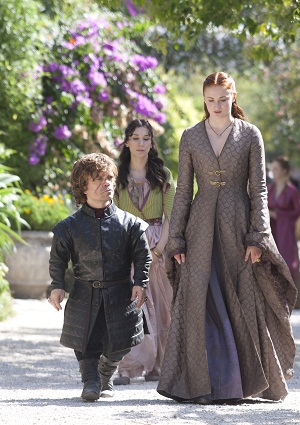 Here’s where we left everyone…

Poor Halfman. After being forced to marry Sansa Stark (with the love of his life always trailing behind), he’s done his best to make the most of the situation. Tyrion (Peter Dinklage) is a good guy, if a bit snarky and prone to nights with hookers. He refuses to touch Sansa, despite his marital “right.” He knows he’s most likely committed to her for eternity, though, and I think deep down he hopes she’ll eventually learn to love him. They even have a bit of a bonding moment when Sansa helps him plot revenge on two men that laugh at him. (She hears him chanting their names and first assumes he wants to kill them, much like Arya’s list of people she will kill.)

He’s called away to a meeting, though. Joffrey is particularly bratty. At first, you can’t help but be on board with Tywin when he, literally, sends Joffrey to bed early. That soon changes, though, when Tywin becomes particularly sharp-tongued with his imp of a son. He basically tells Tyrion the only reason he’s still alive is because he was trying to keep up appearances. Nice.

Oh, and since it was Bolton who helped orchestrate the Red Wedding and end the war in the north, Tywin bequeaths the title of Warden of the North to Bolton instead of his son. That had to sting.

Speaking of Bolton, it turns out it’s Bolton’s crazy bastard son, Ramsay, who’s been keeping and torturing Theon all this time. He’s currently working on convincing Theon his new name is “Reek” due to the fact that he stinks. If you’ll remember, Ramsay castrated poor (-ish) Theon a while back. This week, his father received his “member” in the mail and was told, in essence, to GTFO of the north or Ramsay would continue to send bits and pieces of Theon to his father.

Of course the jerk completely shrugged off the situation. Luckily for Theon, that incredibly incestuous horseback ride with his sister left some impression upon her. When we last see her, she’s rounding up the troops so she can head off to rescue her brother.

Across the great wide world, the vast majority of people seem to think all of the Starks are dead. That actually couldn’t be farther from the truth, most are still living, just scattered across the world. And while Jon is a bastard and goes by the last name “Snow,” he’s still alive and, if Sam has anything to do with it, well.

After last week’s fight, Jon took off on his horse without his “love” Ygritte. She caught up with him this week, though, and managed to land three of her arrows in him as he hopped on his horse and headed for The Wall.

Sam and Gilly recently arrived at The Wall, too, and it’s been agreed that Gilly can stay to avoid the wrath of her evil father. While it’s awesome that Jon is still alive, it’s a bit of a bummer…

Bran goes past the wall and into the great white unknown

Jon just missed Bran, for the second time in a row. Last time Bran and his gang hid at the top of a tower as Jon fought with the wildlings, and then he took off, leaving Ygritte with her people and not knowing he was abandoning his favorite little brother.

Then, just before Jon showed up, Bran and his gang ran into Sam and Gilly. Bran is determined his place is north of the wall. No amount of Sam’s whining could change his direction. Bran, Hodor and the siblings left and (seemingly) hours later, Jon returned. 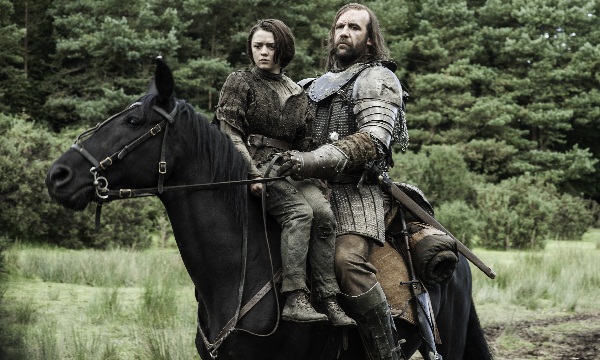 Also not dead yet: Arya

The Hound sure has turned into a good guy. Upon arriving late (thankfully) to the Red Wedding, he conked Arya on the head and left with her before she could see anything too awful. This week, though, she was forced to witness the celebration of her brother’s death. Later, when she and Hound rode past some wanderers claiming to be in on the action, Arya reached her breaking point.

Her innocent little girl act caught one man off guard and soon she was stabbing him to death with a knife she lifted from The Hound. Of course, The Hound had to step in to take out the rest of the revelers. But, at least she got in a kill. She’s such a bada** — like a very small Brienne of Tarth.

The Kingslayer returns to King’s Landing

While we’re on Brienne of Tarth, it was quite rewarding to see her and Jaime once again. We first caught sight of them as they passed through the gates into King’s Landing, tiredness and uneasiness in their eyes.

Perhaps the best/saddest part of their return: Jaime’s appearance at Cersei’s (Lena Headey) door. When he muttered her name, she turned and looked at him. She didn’t run to him, though, like one would expect from a woman when she sees the man she loves. It’s easy to, at first, blame it on her sadness of the fact that he’s returned but she’s being forced to marry someone else. When her eyes fall to his missing hand, though, you have to wonder: Will things ever be the same for them? In that moment, he hardly looks worthy of being neither a king nor the man between a queen’s sheets. 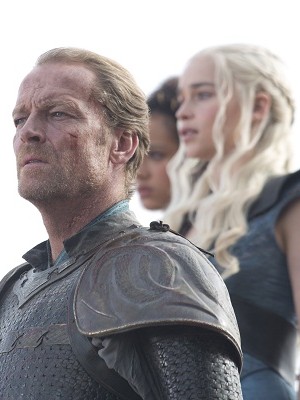 Then, again, she’s not really the queen, anyway…

Khaleesi is the Queen Mhysa

While all the men were playing their own little games and fighting their own little battles, Dani/Khaleesi has been preparing for the war. When we finally see her in the finale, we see just how big her army has become. Using her “I don’t own you” approach, she’s earned herself another city of followers. As they lift their Mhysa (meaning “mother”) over their heads, the camera pans out and we see her thousands of new soldiers.

When Khaleesi finally hits the gates of King’s Landing, no one in Westeros will know what hit them.

In other words, we can’t wait for Season 4!