56 cans of beer. One Milky Way bar. Zero chance of survival. This slack-pack of actors play heightened versions of themselves as they hole up in James Franco’s house while the world comes to a rip-roaring end. In this satire of Armageddon, it’s every funny man for himself. Let the raunchy fun begin! 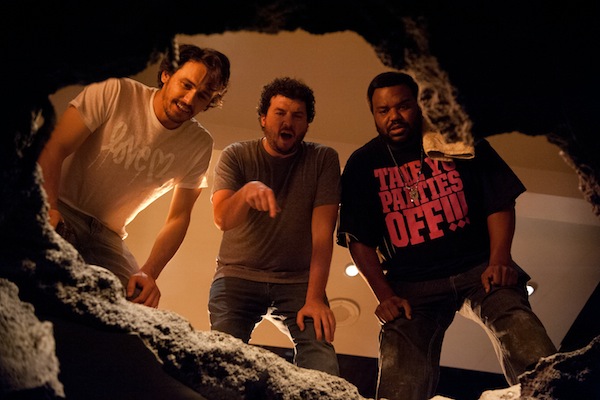 Lesser-known comedian Jay Baruchel (Knocked Up) flies to Los Angeles to visit his buddy Seth Rogen for what he thinks is going to be a relaxing weekend reconnecting with the Rogster. Instead, Rogen convinces Baruchel to attend a party at James Franco’s house in the Hollywood Hills. The stars come out for the party — everyone from Rihanna and Emma Watson to Mindy Kaling and Aziz Ansari are there.

It’s terrific fun to see the actors behave as we imagine they would in real life, particularly Franco, who plays up his pretentious side. Baby-faced Michael Cera, however, really takes it to the edge and plays himself as a coked-up libertine. When we find him pants-down in the bathroom, he’s getting “serviced” by two women, one in the front and one in the back. Channing Tatum even makes a cameo in what’s probably his funniest onscreen moment ever.

Battle of the flicks: Man of Steel vs. This Is the End >> 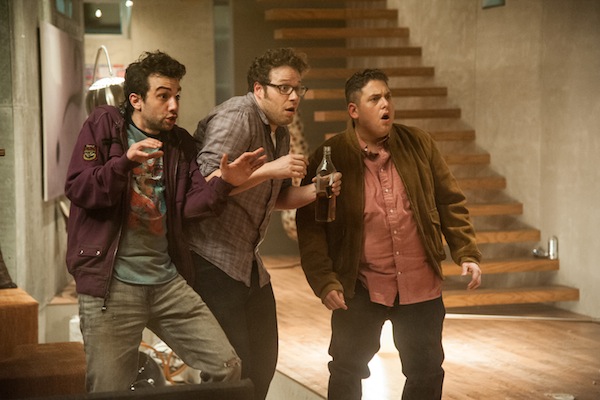 Soon, the partying leaves Rogen with the munchies and he and Baruchel make their way to the local convenience mart where they encounter some freaky paranormal activity. There are some explosions, earthquakes and rumbling before the guys see columns of blue light that appear to beam other shoppers up into the sky.

This Is the End: Trailer, cast and more >>

Rogen and Baruchel race back to Franco’s house where a giant crevice in the earth has fatally sucked other partiers deep into the planet’s core. By the next morning the only people left are Franco, Rogen, Baruchel, Jonah Hill, Craig Robinson (The Office) and Danny McBride (East Bound & Down). Can they survive? Probably not, but it’s fun watching them try as they drink their own pee and kind of like it. 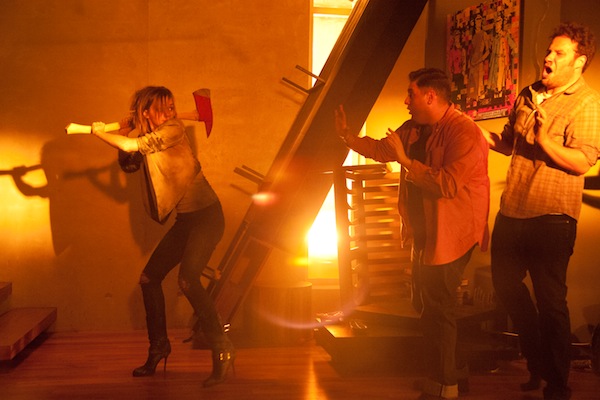 Emma Watson returns to the house, brandishing an axe, revealing a new bad-*ss side to her persona. The men are so concerned for her they have a discussion to make sure none of the guys give off a scary, “rapey” vibe to the pretty Brit. She overhears the conversation and rages against the well-intentioned dudes, nearly chopping their d**ks off.

Run time is 1 hour, 59 minutes. There are no extra scenes after the credits.