Laura Haddock talks Da Vinci’s sexuality and the cast splitting up for Season 2. 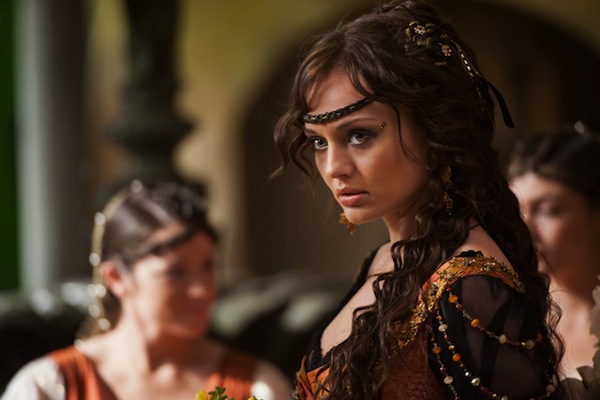 Laura Haddock’s life and career are definitely on the rise. Not only is she engaged to Sam Claflin of The Hunger Games (yeah, we’re jealous too), she’s currently staring in Da Vinci’s Demons as the mysterious Lucrezia Donati. With the season finale of the show airing tonight, Haddock shared her favorite moments of the season so far and what we can expect at the end of this season and for Season 2.

SheKnows: Da Vinci’s sexuality has become quite the talking point during this season. Were you surprised? And, as an actor, how do you take on that challenge?

Laura Haddock: No, I wasn’t surprised. We were talking about it. You like to discuss lots of topics, and that was just quite an interesting one to talk about. Obviously, we knew while we were shooting it, but we honored him and his lifestyle and his choices.

SK: Da Vinci’s sanity is definitely up in the air. Do you think he’s crazy?

LH: There’s such a fine line between genius and madness, and I think he runs it. I certainly think he is very, very ambitious and wants to succeed in lots of different areas in lots of different things, and that can make someone crazy. He never just kicks back and relaxes. He’s probably on the side of genius more than crazy.

SK: How similar do you think the show’s portrayal of Da Vinci is to the real man?

LH: Nobody really knew who he was. We know who we think he was. It’s always a guessing game. The research the show’s done has taken a lot of truth and a lot of facts and mixed it with mystery and excitement. You’re probably thinking that can’t be true, that must be made up. But it’s not! He actually did that or invented that. We know him as this old man with a beard, but he was 25 years old. He was passionate. He was young and was living a young person’s lifestyle. I think we’ve actually portrayed him in a real way.

SK: What has been your favorite Da Vinci invention so far?

LH: The diving suit. That was incredible. That was the one that took my breath away. He wasn’t just a one-trick pony. He wasn’t inventing one certain type of thing. He was jumping among all these different kinds of inventions that didn’t have a particular connection to one another. It’s quite fascinating how many different things he had going on in his head. That was the coolest.

SK: What can you tell us about Season 2?

LH: It goes pretty mental in Season 2. The only thing I can say is we’re not all together as much. It’s really exciting. There’s a lot that happens. You learn a lot more about why Lucrezia is the way she is and why she’s doing what she’s doing. You learn about her past — how it affects her present and will affect her future.

SK: Can you tell us a little bit about the finale tonight?

SK: From the preview of the finale, it looks like there will be a steamy confrontation between Da Vinci and Lucrezia. Do you think Da Vinci will find a way to forgive her?

LH: That’s so hard because she wouldn’t forgive someone else who did all the things that she’s done. It’s really hard. She’s done so many things now that have affected him, his friends or his life directly. I don’t know what the advice would be. If Da Vinci was telling me about her, I think I would be like, “Dude, walk away.” But it’s like a magnet. They just get drawn together. She needs him, and he needs her.