It’s been a great week for Mel Brooks. He was recently honored by his peers with AFI’s Lifetime Achievement Award. After nearly 65 years in the business, he is still as sharp as a tack! 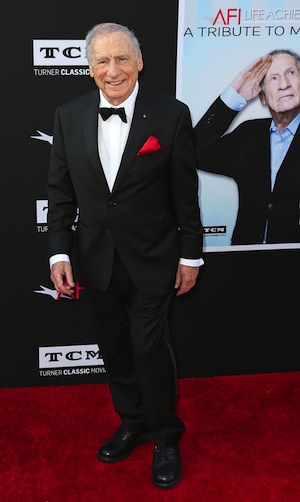 This year, the American Film Institute Life Achievement Award took a humorous turn. It honored comedy legend and filmmaker Mel Brooks. Thursday, countless stars came out to celebrate the 86-year-old and his contribution to cinema.

Brooks is a jack-of-all-trades. Not only is he a talented director, but he’s also a screenwriter, composer, lyricist, producer, actor and — of course — comedian.

According to the Los Angeles Times, one of the ceremony’s most rousing moments came with the introduction of Teri Garr. The actress, who starred in Brooks’ Young Frankenstein, has spent years fighting multiple sclerosis. When the camera panned to her in the audience, Garr received a roaring ovation.

Over the course of his 60-plus-year career, Brooks has done it all. He’s achieved success in television, in film and on the Broadway stage. He was the driving force behind Get Smart, The Producers, Blazing Saddles, Silent Movie, History of the World: Part I, Spaceballs and Robin Hood: Men in Tights.

Despite his string of comedic hits, Brooks also dipped into drama. Many don’t know that he executive produced David Lynch’s classic The Elephant Man. The film was nominated for eight Academy Awards and starred Brooks’ late wife, Anne Bancroft.

Brooks’ AFI tribute was recorded and will air June 15 on TNT.