Ricky Gervais officially threw his hat into the ring to host the 2014 Oscars. Is he too racy for the Academy Awards? 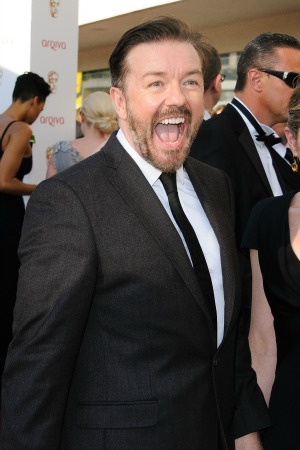 It’s only June and the Oscars host race is already heating up. The current name being tossed into the ring is Ricky Gervais.

In an interview with GoldDerby.com, the comedian revealed that he would consider hosting the Academy Awards in March 2014. However, he knows the job comes with a few rules.

Gervais said, “I doubt the job offer would come without some strings attached. The worst string being, handing in my credentials as a comedian in favor of a family entertainer.”

The hosting gig has long been considered one of the hardest jobs in Hollywood because of the time commitment, the criticism from the public and the formality of the ceremony. It’s easier for a traditional comedian like Billy Crystal to host versus a funnyman who uses colorful language to pepper his comedy like Gervais.

However, the 52-year-old was a wildly successful host for three years at the less conservative Golden Globes. Gervais had a grand old time making fun of Hollywood during his reign.

He told the awards site, “We have to be able to poke fun at society without favoring any part of it because we are beholden to someone. And it’s a fine line between feeling like you’ve sold your soul and feeling like you’re ruining someone’s party. It would be very temping though, I must admit.”

Clearly, hosting the Oscars is something Gervais has given some thought to because he said he would be “incredibly flattered” if asked.

In fact, he came right out and said, “It would be a thrill and an honor.”

Seth MacFarlane hosted the 2013 Oscars and he recently shared that he would not be back for a second outing on the big stage. Executive producers Craig Zadan and Neil Meron will be back, though. It should be noted that it’s the producers who chose the host, not the Academy of Motion Picture Arts and Sciences.

With Zadan and Meron’s musical theater background, it might not be the best fit since Gervais isn’t known for his singing and dancing.

Perhaps this will be the year that Neil Patrick Harris finally hosts the Oscars. He’s hosting the Tonys and the Emmys, so he might as well host every awards show.

28 mins ago
by Alyssa K. Davis